Iwata is a city located in Shizuoka Prefecture, Japan, widely known as the headquarters of the Yamaha Motor Corporation. Iwata is also home to Júbilo Iwata, a J. League soccer team, as well as Yamaha Jubilo, a rugby team.

Iwata is located in southwestern Shizuoka Prefecture, bordered by the Tenryū River to the west and the Pacific Ocean to the south.

Iwata is an ancient settlement, and contains the ruins of the Nara period provincial capital and Kokubun-ji of Tōtōmi province. During the Edo period, it developed as a post station on the Tokaidō and contained Mitsuke-juku, one of the 53 stations on the road.

On the North exit of JR Iwata station, the Great Camphor tree of Zendoji temple is situated. It was once a part of Zendoji temple and it is believed to be 700 years old. Its height is 18.3 meters and its diameter at chest height is 2.87 meters. The root structure bulges out of the ground creating a second level, and the circumference at the portion touching the surface is 32.9 meters. 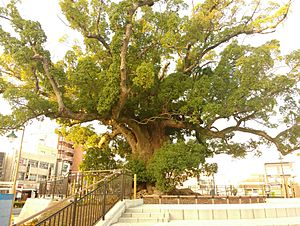 The economy of Iwata is primarily agricultural and is known for green tea and melons grown in greenhouses, which are called "Iwata melon". The Yamaha Corporation was founded in Iwata and maintains a strong presence in the city. Yamaha Motor's headquarters is in Iwata. Suzuki Motor Corporation has a vehicle assembly plant in Iwata.

All content from Kiddle encyclopedia articles (including the article images and facts) can be freely used under Attribution-ShareAlike license, unless stated otherwise. Cite this article:
Iwata, Shizuoka Facts for Kids. Kiddle Encyclopedia.