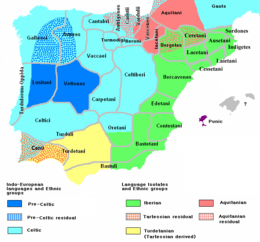 Ethnology of the Iberian Peninsula c. 200 BC, based on the map by Portuguese archeologist Luís Fraga da Silva [Wikidata]

The Celtiberians were a group of Celts and Celticized peoples inhabiting the central-eastern Iberian Peninsula during the final centuries BC.

These tribes spoke the Celtiberian language and wrote it by adapting the Iberian alphabet. The numerous inscriptions that have been discovered, some of them extensive, have allowed scholars to classify the Celtiberian language as a Celtic language, one of the Hispano-Celtic (also known as Iberian Celtic) languages that were spoken in pre-Roman and early Roman Iberia.

In 105 BC, Celtiberian warriors drove the Germanic Cimbri from Spain in the Cimbrian War (113–101 BC) and also played an important role in the Sertorian War (80–72 BC).

All content from Kiddle encyclopedia articles (including the article images and facts) can be freely used under Attribution-ShareAlike license, unless stated otherwise. Cite this article:
Celtiberians Facts for Kids. Kiddle Encyclopedia.