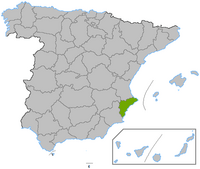 Alacant (Spanish: Alicante) province is the fifth largest Spanish province by population with 1,750,000, and the second largest in the Valencian Community. It is on the south-east Mediterranean coast and the capital is the city of Alicante, a sea- port with a University. It is a commercial city with monuments like Sainte Barbra Castle. Other important cities are Elche, 215,000 with palms trees and its important shoe industry; Torrevieja, 100,000, tourist centre with the world-famous Habaneras contest; Orihuela, 75,000, agricultural important center; Benidorm, 67,000, the Mediterranean Manhattan; Alcoi, 60,000; textile center, and Elda, 55,000, shoes industry.

The most important river is the Segura, in the south, which provides the water to Alicante, Elche, Torrevieja, Orihuela and other cities. There are others like Vinalopo, Serpis, Amadorio, Ravine of the Sheeps and Monnegre.

The biggest mountain is Aitana, and other mountains are Mariola, Puig Bell, Maigmo and Gold Head, near Alicante. In the coast there are islands, the most important is Tabarca, and other is the Benidorm island. An important coast success is the Penon of Ifach, in Calpe.

All content from Kiddle encyclopedia articles (including the article images and facts) can be freely used under Attribution-ShareAlike license, unless stated otherwise. Cite this article:
Alicante Province Facts for Kids. Kiddle Encyclopedia.