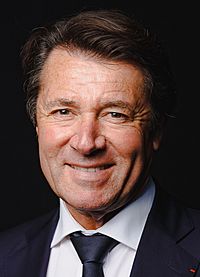 Estrosi was born in Nice. He was married to Dominique Estrosi Sassone from 1995 to 2016. He has three children. In March 2020, during the 2019–20 coronavirus pandemic, Estrosi tested positive for COVID-19.

All content from Kiddle encyclopedia articles (including the article images and facts) can be freely used under Attribution-ShareAlike license, unless stated otherwise. Cite this article:
Christian Estrosi Facts for Kids. Kiddle Encyclopedia.