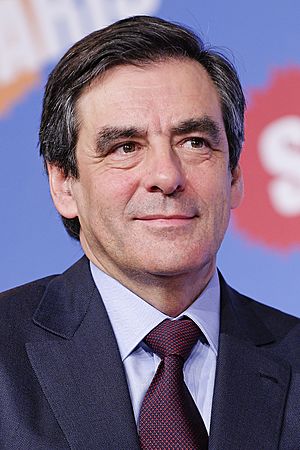 François Fillon
Not to be confused with the French poet François Villon.

Francois Fillon, (born 4 March 1954) is a former Prime Minister of France. He was born in Le Mans. Nicolas Sarkozy gave him the job on 17 May 2007. He resigned on 15 May 2012, following the defeat of Sarkozy in the presidential elections.

In 2017, Fillon ran for President of France and at some point was seen as the front-runner. However, following an embezzlement investigation his popularity decreased and lost the first round to Emmanuel Macron and Marine Le Pen.

On February 24, 2020, Fillon became one of the few Prime Ministers to ever go on trial. On June 29, 2020, he was convicted of fraud and sentenced to five years in prison.

All content from Kiddle encyclopedia articles (including the article images and facts) can be freely used under Attribution-ShareAlike license, unless stated otherwise. Cite this article:
François Fillon Facts for Kids. Kiddle Encyclopedia.