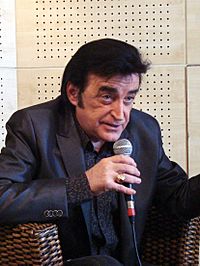 Dick Rivers (born Hervé Forneri; 24 April 1945 – 24 April 2019) was a French singer and actor. He was born in Nice, France. He began performing in the early 1960s. He was an important figure in introducing rock and roll music in France. He was inspired by Elvis Presley. He formed his band Les Chats Sauvages in 1961.

All content from Kiddle encyclopedia articles (including the article images and facts) can be freely used under Attribution-ShareAlike license, unless stated otherwise. Cite this article:
Dick Rivers Facts for Kids. Kiddle Encyclopedia.