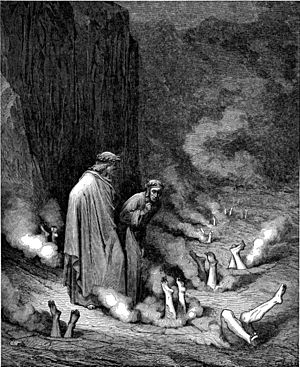 Dante speaks to Pope Nicholas III, committed to the Inferno for his simony, in Gustave Doré's wood engraving, 1861.

Simony means that one pays for an office or a position in the hierarchy of Christian church. It is an offense against canon law. Simony became widespread in the Catholic Church in the 9th and 10th centuries. The name comes from Simon Magus, who appears in the Acts of the Apostles 8:18-24. Simon Magus offers the disciples of Jesus, Peter and John, payment so that anyone he would place his hands on would receive the power of the Holy Spirit. This is the origin of the term simony. but it also extends to other forms of trafficking for money in "spiritual things".

In the Middle Ages there were problems with simony and accusations of simony, especially during the Investiture Controversy. Rulers wanted to employ the educated and centrally organized clergy in their administrations.

All content from Kiddle encyclopedia articles (including the article images and facts) can be freely used under Attribution-ShareAlike license, unless stated otherwise. Cite this article:
Simony Facts for Kids. Kiddle Encyclopedia.