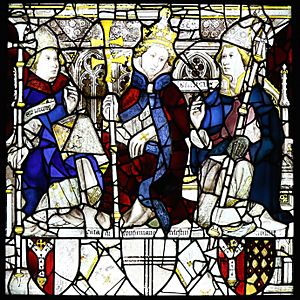 He was born into the noble Orsini family in Rome.

Cardinal Bobone was elected pope on March 30, 1191; and he chose to be called Celestine III.

Pope Celestine was involved in Italian and European political disputes. He crowned the Holy Roman Emperor Henry VI. He excommunicated Duke Leopold of Austria and King Alonso IX of Leon.

All content from Kiddle encyclopedia articles (including the article images and facts) can be freely used under Attribution-ShareAlike license, unless stated otherwise. Cite this article:
Pope Celestine III Facts for Kids. Kiddle Encyclopedia.