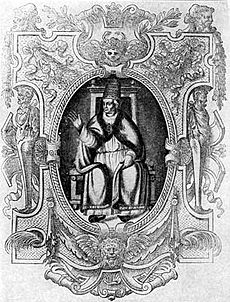 Pope Clement II was the leader of the Catholic Church from 25 December 1046 until he died in 1047.

He was born with the name Suidger von Morsleben in Hornburg, Lower Saxony, Germany. His parents were Count Konrad of Morsleben and Hornburg and his wife Amulrad. His date of birth is unknown.

In the year 1040, von Morsleben became the Bishop of Bamberg. In 1046 he went with King Henry III to Italy and in December, he took part in the Council of Sutri. This took Popes Benedict IX and Sylvester III out of power, and also convinced Pope Gregory VI to resign. King Henry nominated (suggested) Suidger to be the new pope and the council elected him. Suidger took the name Clement II. Shortly after he was elected, Pope Clement and Henry moved to Rome. There, Clement crowned Henry III as Holy Roman Emperor.

Clement II's short pontificate (time as pope) began an improvement in the way the Roman Church worked, especially by making laws against simony. Simony is when people would pay to have sacraments given to them.

The reform party criticized Clement's election because there was royal involvement and because the pope was already bishop of another place.

Clement and the Emperor went on a journey through southern Italy to celebrate his election. Benevento was placed under an interdict (they were prevented from taking part in some Church rites) because they wouldn't allow Pope Clement to enter. Afterwards they went to Germany, where Clement made Wiborada a saint. Wiborada was a martyr who was killed praying for the people of her city.

On Henry III and Pope Clement's way back to Rome in October 1047, Pope Clement suddenly died. His body was taken to Bamberg, a place he had loved, and was buried near the Bamberg Cathedral.

Scientists studied Clement's body in the mid-20th century. They confirmed that the pope had been poisoned with lead sugar. They do not know whether he was poisoned or whether he was using the chemical as medicine.

All content from Kiddle encyclopedia articles (including the article images and facts) can be freely used under Attribution-ShareAlike license, unless stated otherwise. Cite this article:
Pope Clement II Facts for Kids. Kiddle Encyclopedia.