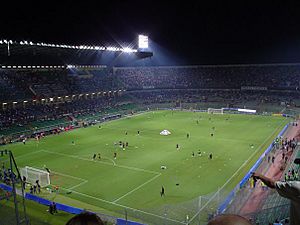 Stadio Renzo Barbera is a sports stadium in Palermo, Italy. It is mainly used for football matches. It has a seating capacity of 36,349. The stadium was opened on 24 January 1932. It is the home stadium of U.S. Città di Palermo of Serie A and sometimes the Italy national team.

All content from Kiddle encyclopedia articles (including the article images and facts) can be freely used under Attribution-ShareAlike license, unless stated otherwise. Cite this article:
Stadio Renzo Barbera Facts for Kids. Kiddle Encyclopedia.