Jovanotti gradually departed from his early mix of hip hop, rap and disco, taking in funk, world music and even classical arrangements and ska influences. As his musical influences changed, so did his lyrics too, which over time began to increasingly address philosophical, religious and political issues, which are more typical of the Italian cantautore tradition. His social and political commitment increased as well. Some of his earlier work is also closer to keyboard-heavy 1980s pop.

Most of his songs are sung in Italian; he also released a Spanish-language greatest hits album. His live album includes a short version of the Sugarhill Gang's "Rapper's Delight." Jovanotti appears on several international compilations, most notably Red Hot + Rhapsody, a 1998 tribute to George Gershwin, on which he performed "I Got Rhythm". Jovanotti also appeared in one of Luciano Pavarotti's charity concerts in 1996.

Along with the evolution of his sound, his social and political commitment increased since the 1990s. As a convinced pacifist, he frequently worked with organizations such as Make Poverty History, Amnesty International, and he has contributed to events dedicated to debt relief (Global Call to Action Against Poverty).

Jovanotti has a friendship with Bono due to their mutual quest for the cancellation of foreign debt in poor African countries. He also collaborated with Michael Franti of Spearhead on his Capo Horn and Ora albums.

Even though Jovanotti has never had a UK chart hit under his own name, he was briefly known in the United Kingdom as the presenter of the DEF II programme Gimme 5. The show, which featured a brief introduction each week by Jovanotti, showcased youth television programmes from around the world.

On 6 September 2008 Jovanotti married Francesca Valiani at Cortona, in the Church of Santa Maria Nuova. Their daughter was born in 1998. He dedicated the lullaby "Per te" to her, one of the hits of the album Capo Horn (1999), and the song "Libera" from the album Lorenzo 2015 cc. 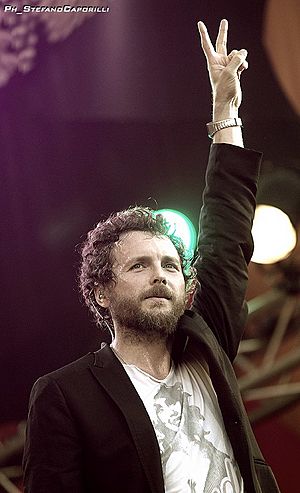 All content from Kiddle encyclopedia articles (including the article images and facts) can be freely used under Attribution-ShareAlike license, unless stated otherwise. Cite this article:
Jovanotti Facts for Kids. Kiddle Encyclopedia.