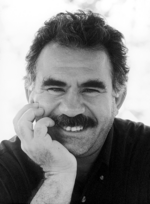 Abdullah Öcalan is the leader of Kurdistan Workers Party (PKK), an influential socialist organization in Turkey. Turkey branded Abdullah Öcalan as a terrorist and has been imprisoned for the rest of his life for terrorist activities in 1999. "Öcalan" means, in Turkish, "he who takes revenge".

He was born on April 4, 1949 into a poor peasant family in the village of Ömerli, in the district of Halfeti in Şanlıurfa Province. He studied at vocational school and then pursued a course at the School of Political Science, Ankara University. He became involved in militant Maoist politics and was first arrested in 1973. In 1975 he went to Syria where he was one of the founder members of the PKK in 1978. At the First Congress in November 1978 he was elected leader. Although the organization was named the Kurdistan Workers Party, it never became a real political party and it was not registered as one, because it would have been rejected by Turkey which did not agree with its ideology.

He left Turkey in 1979, before the military coup of September 1980, which led to the imprisonment of thousands of members and sympathisers of the organization. In 1982 the PKK decided to resume guerrilla warfare inside Turkey and in August 1984 the military wing, the Liberation Units of Kurdistan (HRK), began operations. In 1985 the political wing was renamed the National Liberation Front of Kurdistan (ERNK) and in 1986 the HRK became the Peoples Liberation Army of Kurdistan (ARGK). Öcalan's pronouncements had become increasingly moderate through the 1990s, publicly he stated his desire to move the PKK away from violence and towards a political approach.

He was forced out of his group's base in Syria, following pressure from Turkey, in November 1998. He fled to Russia and then Europe, he was arrested after arriving from Moscow at Rome's Fiumicino Airport. He was soon released while he appealed for political asylum, Italian law forbids the extradition of someone to a country where they would face a death sentence. An extradition request from Germany also collapsed amid political maneuvering. He left Italy on January 16, 1999 and returned to Russia but soon left for Greece, apparently intending to fly from there to The Hague. He was refused entry to a number of European states and instead, on February 3 the Greek authorities flew him to Nairobi, Kenya.

On February 15, 1999 Turkey succeeded in kidnapping or arresting him in Nairobi and quickly transported him to Turkey. The details of his capture remain unclear. On February 16, across Europe, Kurdish supporters responded with protests, acts of violence and terrorism. Öcalan was charged with treason in Ankara, Turkey on February 23.

Öcalan was held as the only inmate on the prison island of Imrali. He was tried before a military court on the island from May 31, 1999. The trial had six days of proceedings and he was sentenced to death on June 29. His appeal was rejected in November but the sentence was suspended while there was a review by the European Court of Human Rights. In September 2002 a Turkish court finally reduced his sentence to life imprisonment. The country had abandoned the death penalty in August 2002 as part of the process towards joining the European Union.

Since he was put in prison, Öcalan has had much more time to read and write. He has changed many of his views, and wants more peaceful solutions instead of violence. One of the authors who influenced Öcalan's changed thinking was Murray Bookchin, an American writer whose idea of "Libertarian municipalism" would lead Öcalan to develop Democratic Confederalism.

All content from Kiddle encyclopedia articles (including the article images and facts) can be freely used under Attribution-ShareAlike license, unless stated otherwise. Cite this article:
Abdullah Öcalan Facts for Kids. Kiddle Encyclopedia.