Masoud Barzani (Kurdish: ,مه‌سعوود بارزانی Mesûd Barzanî; born 16 August 1946) is a Kurdish politician who has been leader of the Kurdistan Democratic Party (KDP) since 1979, and was President of the Kurdistan Region of Iraq from 2005 to 2017. Barzani was born in the self-declared Republic of Mahabad, and succeeded his father Mustafa Barzani as leader of the KDP in 1979.

Working closely with his brother Idris Barzani until Idris's death, Barzani and various other Kurdish groups fought with Iran against the Iraqi military during the Iran–Iraq War. Barzani has played a key role in the development of the Kurdistan Region polity since the Gulf War. 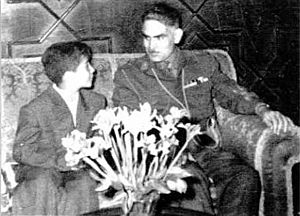 A major result of Saddam Hussein's defeat in the Gulf War (1991) and Operation Provide Comfort was the ultimate establishment of Kurdish control over their traditional homeland in northern Iraq, known as Iraqi Kurdistan and "South Kurdistan". Just a few months after the creation of the autonomous zone, free elections (a first in Iraq) were held in 1992. The two main Kurdish parties, namely Barzani's KDP and the Jalal Talabani-led Patriotic Union of Kurdistan (PUK), split the vote, and subsequently split the government ministries evenly. In May 1994, however, fighting broke out between the Peshmerga of the PUK and of the KDP. On August 31, 1996 Barzani called on the assistance of Saddam Hussein's regime to help him combat the PUK, which was receiving Iranian assistance. With the aid of the Iraqi army, the KDP drove the PUK from Iraqi Kurdistan's major cities. The PUK eventually regrouped and retook Suleimani and parts of Hawler province. An end to the civil war was brokered in 1998 in the Washington Peace Accords, leaving the Kurdish zone divided between the KDP in the Northwest and PUK in the Southeast. After the invasion of Iraq in 2003, the KDP and PUK gradually established a unified regional government. Barzani became a member of the Iraqi Governing Council and was the president of the council in April 2004. He was elected as the President of Iraqi Kurdistan by the Parliament of Iraqi Kurdistan in June 2005. 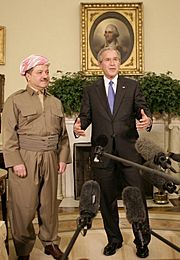 President George W. Bush talks to reporters as he welcomes Masoud Barzani to the Oval Office at the White House, Tuesday, 25 October 2005

As President of the Kurdistan Region, Barzani has made official visits to several countries and met dignitaries of the likes of US President George W. Bush, UK Prime Minister Tony Blair, the Pope at the Vatican, the Italian Prime Minister Silvio Berlusconi in Rome and King Abdullah of Saudi Arabia in Riyadh.

In July 2009, in the first direct elections for the presidency of the autonomous Kurdistan Region, Masoud Barzani was reelected as president by a popular ballot, receiving 69.6% of the votes. The elections were closely monitored by international observers and the Iraqi Electoral Commission. In August 2013, after the expiration of his 8-year term, the parliament extended his presidency for another two years, and he continued in the role even beyond this extension.

Masoud Barzani was one of the eight candidates shortlisted in the Time magazine's 2014 Person of the Year, for his efforts to push for Kurdish independence with the ongoing fight against the Islamic State of Iraq and Syria. 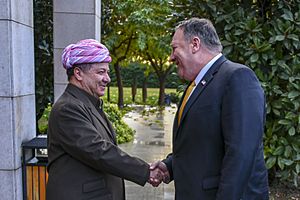 The Iraqi government rejected the results of the referendum. On 15 October, units of the Iraqi security forces and Popular Mobilization Forces, entered the Kurdish-held city of Kirkuk, forcing a withdrawal of the Peshmerga and prompting similar withdrawals across other contested cities in northern Iraq.

Following the failure of the referendum and the Peshmerga's territorial losses, Barzani announced on 29 October that he would step down as the President of Kurdistan Region.

He is still the president of the KDP and receives Ambassadors.

All content from Kiddle encyclopedia articles (including the article images and facts) can be freely used under Attribution-ShareAlike license, unless stated otherwise. Cite this article:
Masoud Barzani Facts for Kids. Kiddle Encyclopedia.