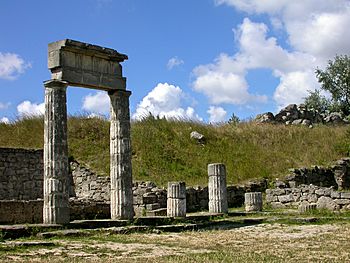 Ruins in Panticapaeum, modern Kerch, the capital of the Bosporan Kingdom.

The Bosporan Kingdom (often called Kingdom of the Cimmerian Bosporus) was an ancient empire, covering the Crimea and a lot of the north coast of the Black Sea. It is regarded as the first real 'Hellenistic' country also speaking Greek.

The Bosporan Kingdom was the longest surviving known Roman client kingdom (allied state). It was a Roman Province between 63 and 68, under Roman Emperor Nero. In the 1st century and 2nd century AD was a period of a new 'golden age' of the Bosporan Kingdom when it was famous for its jewellery. In the end of the 2nd century the King Sauromates II inflicted a critical defeat to the Scythians (a nomadic tribe) and included all the territories of the Crimea in the structure of his state.

The Bosporan Kingdom became rich from selling wheat, fish and slaves to rest of Europe. This means that there are a lot of amazing and very rich finds from the Kingdom, especially found in burial barrows (known as kurgans). Today, there are lots of architectural and sculptural remains from the Bosporan Kingdoms and many finds can be seen in the Hermitage Museum in St. Petersburg, Russia. These include gold work and vases imported from Ancient Athens and the rest of Ancient Greece.

All content from Kiddle encyclopedia articles (including the article images and facts) can be freely used under Attribution-ShareAlike license, unless stated otherwise. Cite this article:
Bosporan Kingdom Facts for Kids. Kiddle Encyclopedia.