Clothing in Ancient Greece was usually made out of big rectangular pieces of cloth. The cloth was sewn very little, or not at all. The cloth was then put around the body and held in place by belts, fibulae, or other fastenings. The cloth was made from linen or wool.

The peplos (plural: peploi) was a garment worn by women of ancient Greece. The peplos was a large square piece of cloth. The cloth was then folded over to create a double layer, called apoptygma, in the upper part of the body. The cloth is then folded around the body, and fastened over each shoulder. The ionic or laconic peplos was open on the side of the body, while the doric peplos was sewn shut like a tube. The peplos was worn in such a way that the opening was on the right side of the body. Usually a belt was worn over the peplos. The belt could be worn over or under the apoptygma.

In Greece, the peplos was mostly worn before the 5th century. 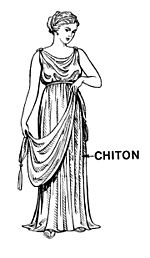 The chiton was made from a large square piece of cloth. It was worn by both women and men.

The doric chiton was very simple. It was made with a large piece of cloth (usually wool). The cloth was folded and put around the body. It was fastened on the shoulders using brooches and then allowed to fall into folds. A belt, often called a gurdle, was worn around the waist to hold the dress in place.

The ionic chiton was sewn like a tube. The material, usually linen, was folded and sewn with holes left for the head and arms. A belt was also worn on the Ionic style to keep it in position and to make it fall into folds from the waist down. 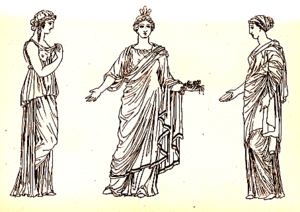 On the right two himatia worn over a chiton.

The himation (plural: himatia) was a big cloth that was used as a cloak. It was worn by both men and women. The himation was usually put from the back over the left shoulder; the other part of the himation was put under the right arm, and then around the front of the body. The himation was so long that it went down to the knees, or it could also be longer.

The himation was usually made from a lighter cloth, so that it was used as a cloak against warm weather.

The chlamys (plural: chlamydes) was a usually shorter cloak. It was a piece of cloth put over the left shoulder, and fastened over the right shoulder. The chlamys was typically worn by men or soldiers.

Women in Ancient Greece wore long dresses and cloaks. They wore the peplos and chiton, and the himation.

Cosmetics and make-up were used in Ancient Greece. White lead was used to whiten the skin. White skin for women was seen as a sign of beauty. Juice made from alkanet roots was used to give the cheeks a rosy colour (like rouge). Eye shadow (probably made from ashes) was popular. Lipstick was also used. Perfumes were also important.

Men's clothing was even simpler than women's (if anything). The most important piece of clothing was a shorter version of the chiton, which was also belted at the waist. The top shoulder was often left bare if the man was exercising or doing hard work. The himation was also used, especially on long journeys. A long robe could also be worn with the right shoulder left not covered. Men usually wore no clothes training for military reasons.

At home people went without shoes, but in the streets or when travelling they wore leather sandals. These were very simple and usually made to measure - the man or woman went to the cobbler's shop and put his foot on a piece of leather, and the sole was cut out round the foot. The sole was attached to the foot by leather thongs tied across the instep and round the ankle.

All content from Kiddle encyclopedia articles (including the article images and facts) can be freely used under Attribution-ShareAlike license, unless stated otherwise. Cite this article:
Clothing in Ancient Greece Facts for Kids. Kiddle Encyclopedia.