Augustus (Gaius Julius Caesar Augustus, 23 September 63 BC – 19 August AD 14) was the first and one of the most important Roman Emperors. He led Rome in its transition from a Republic to a great Empire.

Augustus was born at Rome with the name Gaius Octavius Thurinus. His father, also Gaius Octavius, came from a respectable but undistinguished family of the equestrian order and was governor of Macedonia before his death in 58 BC. More importantly, his mother Atia was the niece of Rome's greatest general and de facto ruler, Julius Caesar. In 46 BC Caesar, who had no legitimate children, took his grand-nephew soldiering in Hispania, and adopted him by testament as his heir. By virtue of his adoption, following Roman custom, Octavius then assumed the name C. Julius Caesar Octavianus (hereafter "Octavian").

When Caesar was assassinated in March 44 BC, his young heir was with the army at Apollonia, in what is now Albania. At the time, he was only eighteen years old. 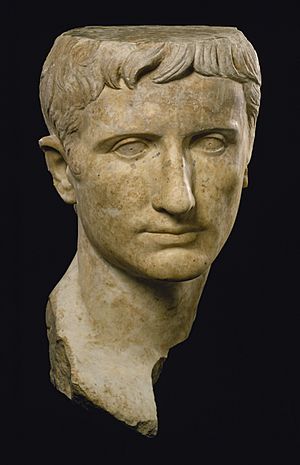 Portraits of Augustus show the emperor with idealized features

Having gained power by means of great audacity, Augustus ruled with great prudence. In exchange for near absolute power, he gave Rome 40 years of civic peace and increasing prosperity, celebrated in history as the Pax Romana, or Roman Peace. He created Rome's first permanent army and navy and stationed the legions along the Empire's borders, where they could not meddle in politics. A special unit, the Praetorian Guard, garrisoned Rome and protected the Emperor's person. He also reformed Rome's finance and tax systems.

In domestic matters, Augustus channeled the enormous wealth brought in from the Empire to keeping the army happy with generous payments, and keeping the Romans happy by beautifying the capital and staging magnificent games.

Augustus also strongly supported worship of Roman gods, especially Apollo, and depicted Roman defeat of Egypt as Roman gods defeating Egypt's. He sponsored Vergil's Aeneid in the hopes that it would increase pride in Roman heritage. Augustus also launched a morality crusade, promoting marriage, family, and childbirth while discouraging luxury and adultery. It was largely unsuccessful.

A patron of the arts, Augustus showered favors on poets, artists, sculptors, and architects, and his reign is considered the Golden Age of Roman literature. 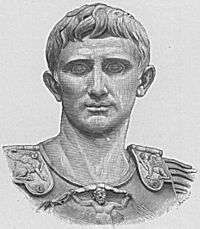 Augustus was deified soon after his death, and both his borrowed surname, Caesar, and his title, Augustus, became the permanent titles of the rulers of Rome for the next 400 years, and were still in use at Constantinople fourteen centuries after his death, (and the derived titles "Kaiser" and "Tsar" would be used until the early part of the 20th century). The cult of the Divine Augustus continued until Constantine the Great converted the State Religion of the Empire to Christianity in the 4th century.

Many consider Augustus as Rome's greatest emperor; his policies certainly extended the empire's life span and initiated the celebrated "Pax Romana" or "Pax Augusta". He was handsome, intelligent, decisive, and a very shrewd politician, but he was not perhaps as charismatic as the earlier Caesar or his rival Antony; as a result, Augustus is not as renowned as either man, and is often confused with Julius Caesar. Nevertheless, his legacy has proved more enduring.

The month of August (Latin Augustus) is named after Augustus; until his time it was called Sextilis.

In looking back on the reign of Augustus and its legacy to the Roman world, its longevity ought not to be overlooked as a key factor in its success. Augustus's ultimate legacy, however, was the peace and prosperity the empire was to enjoy for the next two centuries under the system he initiated.

All content from Kiddle encyclopedia articles (including the article images and facts) can be freely used under Attribution-ShareAlike license, unless stated otherwise. Cite this article:
Augustus Facts for Kids. Kiddle Encyclopedia.