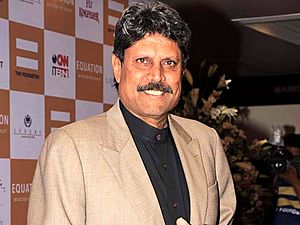 Kapil Dev is a former Indian cricket player. He was an all rounder, a right hand batsman and right arm fast bowler. He captained the Indian cricket team when it won the 1983 World Cup.

Kapil Dev Ramlal Nikhanj was born on 6 January 1959 in Chandigarh, Haryana, India. As a technical bowler, he was known as the "Haryana hurricane". He got a joint man of the match with the Australian cricketer Dean Jones.

All content from Kiddle encyclopedia articles (including the article images and facts) can be freely used under Attribution-ShareAlike license, unless stated otherwise. Cite this article:
Kapil Dev Facts for Kids. Kiddle Encyclopedia.