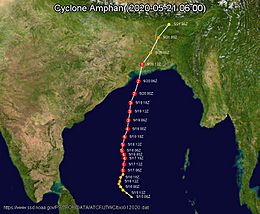 A map showing the path of the storm. 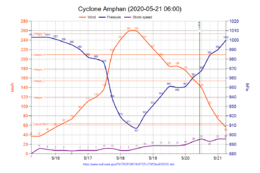 Super Cyclonic Storm Amphan was a very powerful tropical cyclone that caused a lot of damage in East India and Bangladesh in May 2020. It caused over US$13 billion dollars of damage and killed a total of 118 people. It was the strongest cyclone to hit the Ganges Delta since Cyclone Sidr in 2007.

It formed on the 16 May in the Bay of Bengal and tracked into the Ganges Delta before dissipating on the 21 May.

All content from Kiddle encyclopedia articles (including the article images and facts) can be freely used under Attribution-ShareAlike license, unless stated otherwise. Cite this article:
Cyclone Amphan Facts for Kids. Kiddle Encyclopedia.