Andre the Seal facts for kids 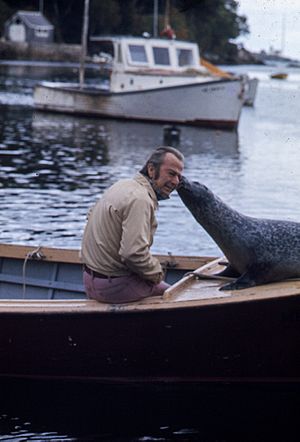 Andre the Seal with Harry Goodridge in 1974

The seal was adopted by Harry Goodridge, who was then a tree surgeon and the Harbormaster of Rockport, Maine. Harry raised the pup, hoping the seal would become his scuba diving companion, and expecting that the seal would eventually return to the wild when given the opportunity. Instead, Andre chose to stay with Harry in Rockport until his death in 1986.

Depictions in media and art 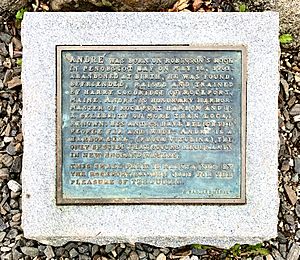 Andre the Seal marker in Rockport, Maine near the statue

The multi-faceted story that developed over the course of their 25-year bond has been well-documented in hundreds of news articles, several books, a 1994 feature film released by Paramount Pictures, and a PBS documentary.

Andre's fame and popularity even resulted in a memorial statue by Jane Wasey being built in his honour in Rockport, Maine harbour.it:Andre la foca

All content from Kiddle encyclopedia articles (including the article images and facts) can be freely used under Attribution-ShareAlike license, unless stated otherwise. Cite this article:
Andre the Seal Facts for Kids. Kiddle Encyclopedia.