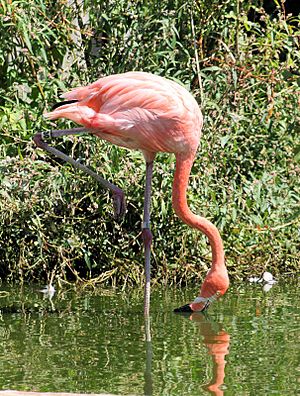 A flamingo at Stone Zoo

Stone Zoo is a medium- to small-sized zoo of about 26 acres (11 ha) in Stoneham, Massachusetts, United States. Founded in 1905, the zoo includes low-lying areas densely developed with smaller exhibits for animals as well as rocky forested hillsides devoted to larger habitats for Species Survival Plan (SSP) programs. It is operated by the Commonwealth Zoological Corporation, doing business as Zoo New England, which also operates the Franklin Park Zoo in Boston.

Stone Zoo is an accredited member of the Association of Zoos and Aquariums.

The Stone Zoo was founded in 1905 as the Middlesex Fells Zoo, a small collection of local animals which soon began to include more exotic species. A new attraction, the Kiddy Zoo, largely based on Mother Goose stories, opened in the 1950s. In the 1960s, the zoo underwent major renovations under the guidance of zoo director Walter D. Stone, including the construction of a large free-flight aviary. The renovation project saw the inclusion of elephants, giraffes, zebras, pygmy hippopotamus, sea lions, and many other large animals. On March 14, 1969, the zoo was renamed the Walter D. Stone Memorial Zoo, following his death in 1968.

The zoo continued to operate through the 1970s and 1980s and began breeding endangered species, including orangutans, kinkajous, siamang, and kudus. A polar bear named "Major" arrived in July 1979, and soon became the zoo's main attraction.

On November 12, 1990, state budget cuts caused the Stone Zoo to cease operation. Following public outcry, the state senate established a private, non-profit corporation to manage the zoo, with the help of fund-raising and donations, and the zoo reopened on June 6, 1992. During this transition period, the zoo fell into disrepair and lost all of its large animals, with the exception of Major who remained until his death in 2000. The zoo rapidly declined in quality and attendance. Old facilities were repurposed including using the former giraffe house as an animal education center.

In the early 2000s, Zoo New England began a fund-raising campaign to reinvigorate both the Stone Zoo and the Franklin Park Zoo.

On September 24, 2005, Stone Zoo celebrated its 100th anniversary. The zoo layout was modified to make the grounds interesting and educational, despite the lack of large animals. Many new exhibits were created and existing ones expanded or upgraded. These improvements have been credited with increasing zoo attendance.

A Massachusetts Bay Transportation Authority (MBTA) bus stop is expected to be added to improve access by public transportation.

The major exhibits and animals on display are:

All content from Kiddle encyclopedia articles (including the article images and facts) can be freely used under Attribution-ShareAlike license, unless stated otherwise. Cite this article:
Stone Zoo Facts for Kids. Kiddle Encyclopedia.