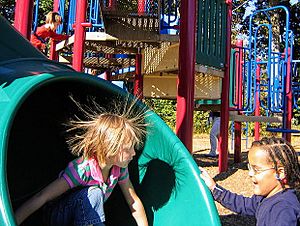 Contact with the slide has left this child's hair positively charged so that the individual hairs repel one another. The hair can also be attracted to the negatively charged slide surface. 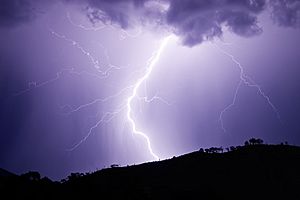 Lightning, one example of static discharge

Static electricity means the increase of electric charge on the surface of objects. This electric charge remains on an object until it either flows into the ground, or loses its charge quickly by a discharge. Charge exchange can happen in conditions like when different objects are rubbed and separated. A static charge will only remain when one of the surfaces has a high resistance to electrical flow. The effects of static electricity are familiar to most people because they can see, feel and even hear the spark. This spark happens when the excess charge is neutralized. This neutralization occurs when excess charge flows into an electrical conductor (for example a path to ground). Other charge flow occurs when a charged object is near a region with an excess charge of the opposite polarity (positive or negative). The familiar phenomenon of a static 'shock' is caused by the neutralization of charge.

Many situations can cause static electricity.

The feeling of a static electric shock is caused by the stimulation of nerves as the neutralizing current flows through the human body. Due to the presence of much water in the body, the charge is generally not enough to cause a dangerously high current. Lightning is also an example of static discharge. A cloud gets a very huge charge by clashing with other clouds. It gives off the excess charge to the ground. But this huge charge never occurs in the human's surroundings naturally, unless he is struck by the lightning.

Despite the apparently harmless nature of static electricity, there can be significant risks in research, because a large charge can break down the equipment.

All content from Kiddle encyclopedia articles (including the article images and facts) can be freely used under Attribution-ShareAlike license, unless stated otherwise. Cite this article:
Static electricity Facts for Kids. Kiddle Encyclopedia.