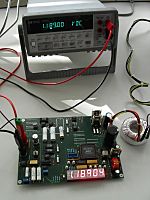 A voltmeter connected to a circuit board

A voltmeter is an instrument used to measure voltage. For instance, a voltmeter can be used to see if there is more electricity left in a battery. The creation of voltmeters became possible when Hans Oersted invented the most simple voltmeter in 1819.

One should also be careful about handling the connection: If there is a high voltage (many volts), one can get hurt or even killed by touching the metal connections with the voltage directly.

How voltmeters show the voltage

When the connections are made, the voltmeter shows the voltage. As there is no direct way to access the voltage, voltmeters are designed as special sort of ammeter which can calculate the voltage by assessing the electrical current and applying Ohm's law.

There are two kinds of voltmeters. One kind has a needle, or "pointer", that points to a number that tells the number of volts. This is the kind of voltmeter where one has to be careful about making the positive and negative connections correctly – if the wrong connections are made, the voltmeter can be damaged.

The second kind of voltmeter shows the numbers in a "digital" way, just like digital clocks and calculators. This kind of voltmeter is not damaged from "wrong" connections; instead, they show a negative number.

Using the right kind of voltmeter

All voltmeters have an upper limit, or a "maximum number" of volts they can "handle". If a voltmeter is used for bigger voltages than it was made to "handle", it may damage or destroy it.

Voltmeters with settings, and multimeters

In this way, one single voltmeter can be used for a lot of different voltages, large and small. Some modern voltmeters can do this setting all by themselves, one just has to make the connection and not worry about if the voltmeter can handle the voltage. It will automatically find a setting that can handle it.

Today, a voltmeter is usually part of a multimeter, an instrument that can work as both a voltmeter, an ammeter, and usually a few more measuring instruments. These also have switces, used to "tell" the multimeter to "be a voltmeter".

Multimeters often have more than two connections, and part of "telling" the multimeter what to measure (that is, whether to be a voltmeter or an amperemeter) is done by choosing the right two connections. This is explained in the manual for the multimeter, and often shown next to the connection points.

Use of amplifiers for sensitive measurement of voltage

The first type of voltmeters show the voltage using a needle or "pointer" pointing to the number of volts. These voltmeters take energy from the thing being measured to move the needle. Some very weak voltage sources might not have enough energy to move the needle to the right voltage. In that case, such a voltmeter shows too few volts. The voltmeter is not sensitive enough.

One solution to the above problem is to make the needle use as little energy as possible to move. However, there is a limit to how sensitive this kind of voltmeter can be. When vacuum tubes and transistors were invented, it became possible to build electronic amplifiers. By using an amplifier, a voltmeter can measure very small voltages from very weak sources. Modern voltmeters and multimeters normally have this kind of amplifier in them.

All content from Kiddle encyclopedia articles (including the article images and facts) can be freely used under Attribution-ShareAlike license, unless stated otherwise. Cite this article:
Voltmeter Facts for Kids. Kiddle Encyclopedia.