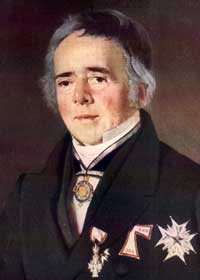 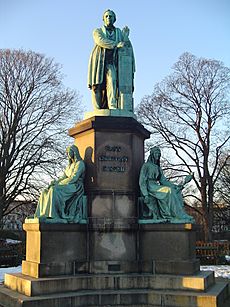 A statue of Hans Christian Ørsted in a park in Copenhagen

Hans Christian Oersted (14 August 1777 – 9 March 1851) was a Danish physicist and chemist. He is best known for discovering a relationship between electricity and magnetism, a field now known as electromagnetism.Oersted discovered that electric currents create magnetic fields, which was the first connection found between electricity and magnetism. Oersted's law and the oersted (Oe) are named after him. He also discoHvered that aluminium was an element.

Oersted was also a writer and poet. His poetry series Luftskibet ("Airship") was inspired by the balloon flights of his physicist friend, Étienne-Gaspard Robert.

All content from Kiddle encyclopedia articles (including the article images and facts) can be freely used under Attribution-ShareAlike license, unless stated otherwise. Cite this article:
Hans Christian Ørsted Facts for Kids. Kiddle Encyclopedia.