Endothermic reactions take in heat. Exothermic reactions give out heat. Thermochemistry combines the concepts of thermodynamics with the idea of energy in the form of chemical bonds. It includes calculations of such quantities as heat capacity, heat of combustion, heat of formation, enthalpy, entropy, free energy, and calories. 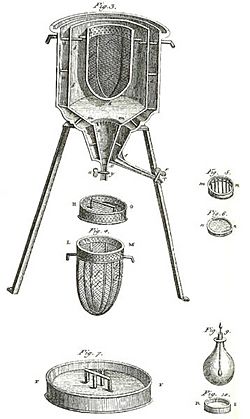 The world’s first ice-calorimeter, used in the winter of 1782-83, by Antoine Lavoisier and Pierre-Simon Laplace. It was used to find the heat evolved in various chemical changes. These calculations were based on Joseph Black’s earlier discovery of latent heat. These experiments started thermochemistry.

These discoveries came before the first law of thermodynamics (1845). They helped scientists understand this law.

Gustav Kirchhoff showed in 1858 that change in the heat of reaction is given by the difference in heat capacity between products and reactants:

. Integrating this equation allows the evaluation of the heat of reaction at one temperature from measurements at another temperature.

The measurement of heat changes is called calorimetry. It measures the heat of chemical reactions or physical changes. A calorimeter, a device for calorimetry, is usually a closed in chamber.

Calorimetry has these steps: Chemists make the change happen inside the chamber. The temperature of the chamber is measured either using a thermometer or thermocouple. The temperature is plotted against time to give a graph. Chemists use the graph to calculate fundamental quantities.

Modern calorimeters have small computers that measure the temperature and give the calculated data quickly. One example is a differential scanning calorimeter (DSC).

Several thermodynamic definitions are very useful in thermochemistry. A "system" is the specific section of the universe that is being studied. Everything outside the system is considered the surrounding or environment. A system may be:

All content from Kiddle encyclopedia articles (including the article images and facts) can be freely used under Attribution-ShareAlike license, unless stated otherwise. Cite this article:
Thermochemistry Facts for Kids. Kiddle Encyclopedia.