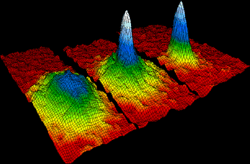 Thermal physics is the combined study of thermodynamics, statistical mechanics, and kinetic theory. This umbrella-subject is typically designed for physics students and functions to provide a general introduction to each of three core heat-related subjects. Other authors, however, define thermal physics loosely as a summation of only thermodynamics and statistical mechanics.

Thermal physics, generally speaking, is the study of the statistical nature of physical systems from an energetic perspective. Starting with the basics of heat and temperature, thermal physics analyzes the first law of thermodynamics and second law of thermodynamics from the statistical perspective, in terms of the number of microstates corresponding to a given macrostate. In addition, the concept of entropy is studied via quantum theory.

A central topic in thermal physics is the canonical probability distribution. The electromagnetic nature of photons and phonons are studied which show that the oscillations of electromagnetic fields and of crystal lattices have much in common. Waves form a basis for both, provided one incorporates quantum theory.

A thermodynamic reservoir is a system which is so large that it does not appreciably alter its state parameters when brought into contact with the test system.

It is important that these two types of instruments are distinct. A meter does not perform its task accurately if it behaves like a reservoir of the state variable it is trying to measure. If, for example, a thermometer, were to act as a temperature reservoir it would alter the temperature of the system being measured, and the reading would be incorrect. Ideal meters have no effect on the state variables of the system they are measuring.

All content from Kiddle encyclopedia articles (including the article images and facts) can be freely used under Attribution-ShareAlike license, unless stated otherwise. Cite this article:
Thermal physics Facts for Kids. Kiddle Encyclopedia.