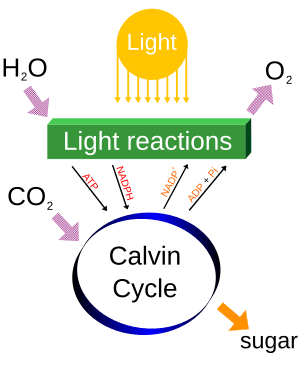 A scheme showing examples of photochemical reactions in nature

Photochemistry is the study of chemical reactions that go with light. There are many natural examples of such reactions. One is photosynthesis, which is a very important process through which plants form oxygen from carbon dioxide and water. Another is making vitamin D in the body.

Many times reactions go with heat: as you heat molecules, they start to move around and so hit other molecules which can then react. What molecules need is just some activation energy, a little energy to start the reaction. In the case of photochemistry, this energy is given by the light. A molecule or an atom absorbs at a certain wavelength. If light is given at this wavelength then the molecule or atom becomes excited. It is then easier for it to react.

Another way in which light can help reactions go is by changing the symmetry of a molecule. This can be tested with the Woodward–Hoffmann rules. Some pericyclic reactions go with heat, some go only with light.

In atmospheric chemistry, light is very important. This is because there is much more UV light at the top of the atmosphere. This allows reactions that don't happen on the ground. For example, ozone can split in an oxygen molecule and one oxygen atom.

All content from Kiddle encyclopedia articles (including the article images and facts) can be freely used under Attribution-ShareAlike license, unless stated otherwise. Cite this article:
Photochemistry Facts for Kids. Kiddle Encyclopedia.