The chemical element is called Phosphorus in English 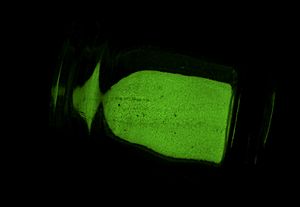 A phosphor is a chemical compound that emits light when it is exposed to light of a different wavelength (i.e. color). Phosphors do not contain the chemical element Phosphorus, which can be made to glow a different way. This sometimes causes confusion. Phosphors are used in many types of lighting, including fluorescent bulbs where they change the ultraviolet light produced by excited mercury vapor into visible light.

The chemistry of phosphors varies greatly depending on what the phosphor is to be used for. Phosphors include 'glow in the dark' materials that can be found in novelties, toys, and emergency safety lighting for buildings. They are used in the screens of older style cathode ray tube televisions to make visible light from an electron beam. They can also be used to visibly detect ionizing radiation. Light-emitting diodes are devices that often use phosphors to obtain a particular color or color temperature.

All content from Kiddle encyclopedia articles (including the article images and facts) can be freely used under Attribution-ShareAlike license, unless stated otherwise. Cite this article:
Phosphor Facts for Kids. Kiddle Encyclopedia.