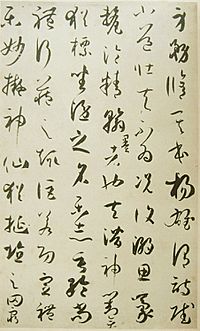 Chinese characters are symbols used to write the Chinese and Japanese languages. In the past, other languages like Korean and Vietnamese also used them. The beginning of these characters was at least 3000 years ago, making them one of the oldest continuously-used (meaning it has not fallen out of use) writing systems in the world. In Chinese they are called hanzi (汉字/漢字), which means "Han character". In Japanese they are called kanji and in Korean hanja.

Characters are a kind of graphic language, much different from languages that use a alphabet such as English. The correct way tell between them is to remember the structure and meaning of every character, not pronunciation because there is very close relationship between meaning and structure of characters. Example: 房(house)=户+方. 房 is a shape-pronunciation character. 户 is for shape and 方 is for pronunciation. 户 means 'door'. 房 means 'A person lives behind a door'. 方 pronunciation is Fang and tone is 1. 房 pronunciation is also Fang, but tone is 2.

All content from Kiddle encyclopedia articles (including the article images and facts) can be freely used under Attribution-ShareAlike license, unless stated otherwise. Cite this article:
Chinese character Facts for Kids. Kiddle Encyclopedia.