Kids Encyclopedia Facts
In this Chinese name, the family name is Wang.

In addition to the esteem in which he is held in China, he has been and remains influential in Japanese calligraphy.

His tomb was severely damaged during the Cultural Revolution.

Born in Linyi, Shandong, Wang belonged to the powerful and prominent Wang clan of Langya. In his youth, the War of the Eight Princes and subsequent invasions of the Five Barbarians led to turmoil in northern China; as such the ten-year-old Wang Xizhi moved south with his clan, and spent most of his life in present-day Shaoxing, Zhejiang and Wenzhou.

He learned the art of calligraphy from Lady Wei Shuo. He excelled in every script but particularly in semi-cursive script. His representative works include, in chronological order, Narration on Yue Yi (樂毅論), The Yellow Court Classic (黃庭經), Commentaries on the Portrait of Dongfang Shuo (東方朔畫讚), Admonitions to the Emperor from the Imperial Mentor (太師箴), Preface to the Collection of Poems Composed at the Orchid Pavilion (蘭亭集序, also commonly known as Lantingji Xu ), and The Statement of Pledge (告誓文). Unfortunately, none of his original works remains today, and only models of them exist. Samples of Wang's handwriting can also be seen in classical Chinese calligraphy texts such as the Chunhua Imperial Archive of Calligraphy Exemplars (淳化閣帖). 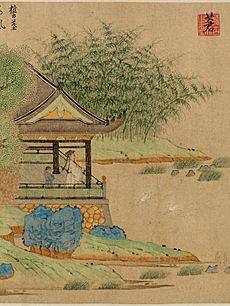 His most noted and famous work is the Preface to the Poems Composed at the Orchid Pavilion, the introduction to a collection of poems written by a number of poets during a gathering at Lanting near the town of Shaoxing for the Spring Purification Festival. The original is lost, but the work survives in a number of finely traced copies, with the earliest and most well regarded copy being the one made between c. 627-650 by Feng Chengsu, and it is located in the Palace Museum in Beijing.

Wang Xizhi is particularly remembered for one of his hobbies, that of rearing geese. Legend has it that he learned that the key to how to turn his wrist whilst writing was to observe how geese moved their necks. There is a small porcelain cup depicting Wang Xizhi "walking geese" in the China Gallery of the Asian Civilisations Museum in Singapore. The other side of the cup depicts a scholar "taking a zither to a friend".

Wang Xizhi had seven children, all of whom were notable calligraphers. The most distinguished was his youngest son, Wang Xianzhi.

In 2010, a small Tang reproduction of one of Wang's calligraphy scrolls on silk with four lines was sold in China at an auction for ¥308 million RMB ($48 million).

"Ru Mu San Fen" is used to describe strong and powerful calligraphy works , and also to describe profound and thorough understanding of articles or things. The emperor went to the northern suburbs for sacrifice. He asked Wang xizhi to write the blessing words on a piece of wood and then send workers to carve it. The engraver was shocked because Wang xizhi's handwriting penetrated more than a third of the wood. He said admiringly: "the character of the general of the right army is “Ru mu san fen”.

He used to practice writing near the pond, and when he finished, he would wash his brush and ink-stone in the pond. Over time, the water of the whole pond turned black. This shows how much effort he has made into practicing calligraphy.

He loved geese very much. He looked at the geese splashing in the river in a daze. Later, he comprehended the principle of calligraphy from the movements of the geese, which helped his calligraphy skills. 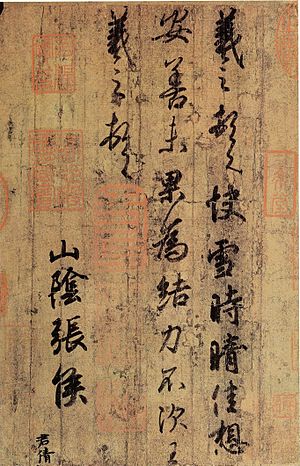 “Mei Zhi Tie”, is a copy featuring 17 characters written by Wang XiZhi. It got its name from the word "meizhi" at the beginning of the article. It was first exhibited in 1973 at the "Showa Lanting Memorial Exhibition". It has two lines and 17 words. The work does not include inscriptions and collection marks.

It was exhibited by the "Chinese and Japanese Calligraphy Treasures Exhibition" on March 12, 2006 in Shanghai.

All content from Kiddle encyclopedia articles (including the article images and facts) can be freely used under Attribution-ShareAlike license, unless stated otherwise. Cite this article:
Wang Xizhi Facts for Kids. Kiddle Encyclopedia.