Kim Dae-jung, or Kim Dae Jung (6 January 1924 – 18 August 2009), was a South Korean politician who served as President of South Korea from 1998 to 2003. He was a 2000 Nobel Peace Prize recipient, the only Korean Nobel Prize recipient in history. He was sometimes referred to as the "Nelson Mandela of South Korea". 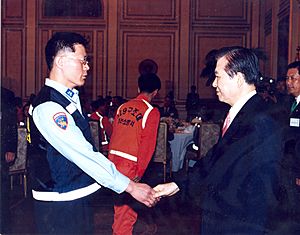 Kim was born on 6 January 1924, but he later registered his birth date to 3 December 1925 to avoid conscription during the time when Korea was under Japanese colonial rule. Kim was the second of seven children to middle-class farmers. Kim was born in Sinan in what was then the Jeolla province; the city is now in Jeollanam-do. Kim's family had moved to the nearby port city of Mokpo so that he could finish high school. He adopted the Japanese name Toyota Taichu during the Japanese colonial period.

Kim graduated from Mokpo Commercial Middle School in 1943 at the top of the class. After working as a clerk for a Japanese-owned shipping company, he became its owner and became very rich. Kim escaped Communist capture during the Korean War. 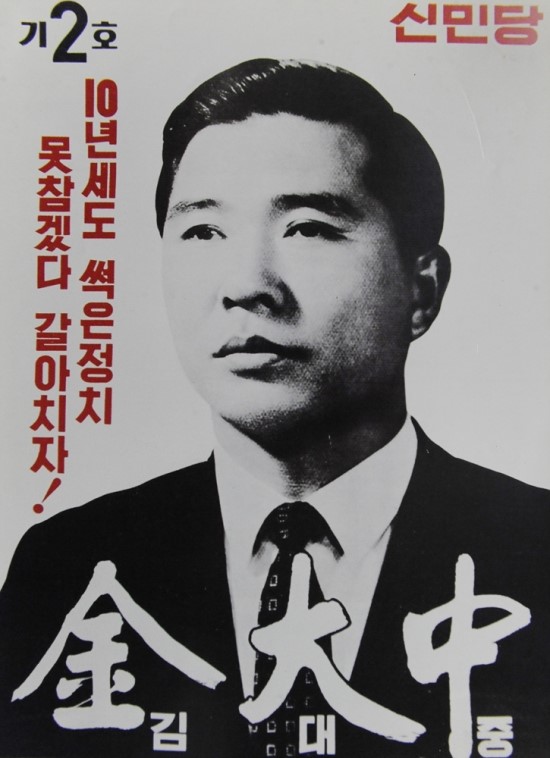 Kim Dae-jung as candidate for the presidential election in 1971

Kim first entered politics in 1954 during the administration of Korea's first president, Syngman Rhee. Although he was elected as a representative for the National Assembly in 1961, a military coup led by Park Chung-hee, who later assumed dictatorial powers. He was able to win a seat in the House in the subsequent elections in 1963 and 1967 and went on to become a respected opposition leader.

A very talented orator, Kim could command unwavering loyalty among his supporters. His strongest support came from the Jeolla region, where he reliably garnered upwards of 95% of the popular vote, a record that has remained unsurpassed in South Korean politics.

Kim was almost killed in August 1973, when he was kidnapped from a hotel in Tokyo by KCIA agents in response to his criticism of President Park's yushin program, which granted near-dictatorial powers. 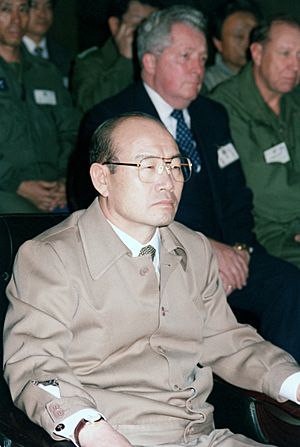 In 1980, Kim was arrested and sentenced to death on charges of sedition and conspiracy in the wake of another coup by Chun Doo-hwan and a popular uprising in Gwangju, his political stronghold.

Pope John Paul II sent a letter to then-South Korean President Chun Doo-hwan on 11 December 1980, asking for clemency for Kim, a Catholic, and with the intervention of the United States government, the sentence was commuted to 20 years in prison.

He was given exile in the U.S. and temporarily settled in Boston and taught at Harvard University as a visiting professor to the Center for International Affairs. During his period abroad, he authored a number of opinion pieces in leading western newspapers that were sharply critical of the South Korean government.

On March 30, 1983, Kim presented a speech on human rights and democracy at Emory University in Atlanta, Georgia and accepted an honorary Doctor of Laws degree by the institution. Two years later, in 1985, he returned to his homeland. 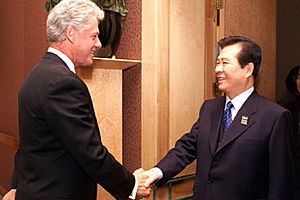 Kim Dae-jung took office in the midst of the economic crisis that hit South Korea in the final year of Kim Young-sam's term. He vigorously pushed economic reform and restructuring recommended by the International Monetary Fund, in the process significantly altering the landscape of South Korean economy. After the economy shrank by 5.8 percent in 1998, it grew 10.2 percent in 1999. In effect, his policies were to make for a fairer market.

His policy of engagement with North Korea has been termed the Sunshine Policy. He moved to begin easing the strained relations with the communist government in North Korea, which culminated in a historic summit meeting in 2000 in Pyongyang with North Korean leader Kim Jong-il. 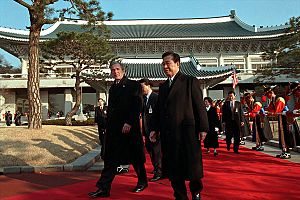 This marked a critical point in inter-Korean relations. On 13 October 2000, he was awarded the Nobel Peace Prize for these efforts.

He introduced South Korea's contemporary welfare state and fostered a greater role for South Korea in the world stage, including the FIFA World Cup, jointly hosted by South Korea and Japan in 2002. Kim completed his 5-year presidential term in 2003. A presidential library at Yonsei University was built to preserve Kim's legacy, and there is a convention center named after him in the city of Gwangju, the Kim Dae-jung Convention Center. 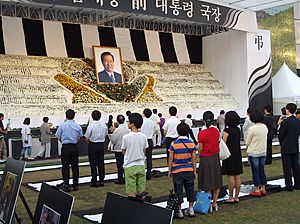 A roadside memorial for Kim Dae-jung 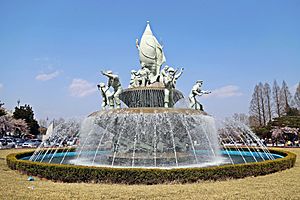 Kim called for restraint against the North Koreans for detonating a nuclear weapon and defended the continued Sunshine Policy towards Pyongyang to defuse the crisis. He also received an honorary doctorate at the University of Portland on 17 April 2008.

Kim died on 18 August 2009 at Severance Hospital of Yonsei University in Seoul. The cause of death was given as multiple organ dysfunction syndrome. An interfaith state funeral was held for him on 23 August 2009 in front of the National Assembly Building, with a procession leading to the Seoul National Cemetery where he was interred according to Catholic traditions.

He is the second person in South Korean history to be given a state funeral after Park Chung-hee. North Korea sent a delegation to his funeral.

All content from Kiddle encyclopedia articles (including the article images and facts) can be freely used under Attribution-ShareAlike license, unless stated otherwise. Cite this article:
Kim Dae-jung Facts for Kids. Kiddle Encyclopedia.