Kids Encyclopedia Facts
Not to be confused with Clare College, Cambridge.

Clare Hall is a constituent college of the University of Cambridge, England. Founded in 1966 by Clare College, Clare Hall is a college for advanced study, admitting only postgraduate students alongside postdoctoral researchers and fellows. It was established to serve as an Institute of Advanced Studies and has slowly grown and developed into a full constituent college.

Clare Hall is one of the smallest colleges with 200 graduate students, but around 125 Fellows, making it the highest Fellow to Student ratio at Cambridge University. Notwithstanding its small size, the college is also notable for its high number of Nobel Laureate affiliates. Clare Hall maintains many Cambridge traditions including formal hall and the tutorial system.

Clare Hall was founded by Clare College (which had previously been known as "Clare Hall" from 1338 to 1856) as a centre for advanced study, but was also intended to become a social group of men and women with their families that would include graduate students studying for higher degrees in the university, research fellows working at post-doctoral level, permanent fellows holding faculty or research posts in the university, and visiting fellows on leave from universities around the world.

After Clare College decided to establish this new centre in January 1964, the initial planning was carried through by a small group of fellows of the college chaired by the Master, Sir Eric Ashby. It was soon agreed that the new centre would be called Clare Hall, the ancient name by which the college itself had been known for more than five hundred years until the mid-19th century.

The Institute of Advanced Studies at the University of Bologna is so far the only institution abroad explicitly modelled upon Clare Hall.

The architect Ralph Erskine was appointed to design the buildings for Clare Hall, which were to include common rooms, offices and dining facilities, a house for the President, and twenty apartments for visiting fellows. A neighbouring house, Elmside in Grange Road, provided rooms for the relatively small number of graduate students.

Sir Eric Ashby, then Master of Clare College and Vice-Chancellor of the University, formally opened Clare Hall in September 1969. Brian Pippard, the first President of Clare Hall, had already moved into the President’s house with his family, twelve research students were living on the college site in Elmside and a number of visiting fellows with their families were living in the newly built college apartments.

Other facilities in the college grounds include a sports complex with a multi-gym and swimming pool and an adjacent tennis court. It also has a dining room which is used for Formal Hall. The university athletics track is a short run from the main college buildings. 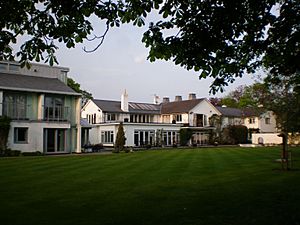 The Anthony Low Building in the garden of Elmside was completed in 2000, providing further common rooms and the Garden Bar for the graduates on the main college site.

In the summer of 1996, the college purchased a substantial property, formerly the Cambridge family home of Victor Rothschild, 3rd Baron Rothschild, which is about five minutes' walk from the college at the end of Herschel Road. It was renamed Clare Hall West Court and, after conversion and some major building works, now provides public rooms, studies, apartments, study bedrooms, a fitness centre and a swimming pool.

Unlike other colleges in the university, Clare Hall does not have a high table at meals or a senior common room, and it is a single society for all social functions and in the use of the various college common rooms and other facilities. This encourages interaction between graduate students, distinguished visiting fellows and other senior members, aided also by the wide variety of national backgrounds and research interests of the members.

The interaction between members of Clare Hall is encouraged also by college seminars, lunchtime discussions and formal lecture series. The latter includes the annual series of lectures relating to human values, given by a distinguished international scholar and sponsored by the Tanner Foundation. They also include the annual Ashby lecture, given by a visiting fellow, and the more frequent ASH seminar (arts, social sciences and history) that were initiated by some of the visiting life members.

Other events include art exhibitions, films and small concerts which supplement the wealth of music available in the university.

All content from Kiddle encyclopedia articles (including the article images and facts) can be freely used under Attribution-ShareAlike license, unless stated otherwise. Cite this article:
Clare Hall, Cambridge Facts for Kids. Kiddle Encyclopedia.