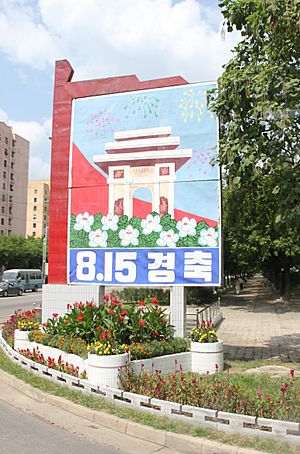 The National Liberation Day of Korea, is a holiday on August 15 in both North and South Korea. It is to celebrate Victory over Japan Day, the day when Korea was freed from Imperial Japanese control by the United States and the Soviet Union. In South Korean, it is written as 광복절 or 光復節, and pronounced gwangbokjeol. In North Korea, it is written as 조국해방의 날 or 祖國解放의 날, and is pronounced jogukhaebangui nal.

All content from Kiddle encyclopedia articles (including the article images and facts) can be freely used under Attribution-ShareAlike license, unless stated otherwise. Cite this article:
National Liberation Day of Korea Facts for Kids. Kiddle Encyclopedia.