Fremont is a neighborhood in Seattle, Washington, United States. Originally a separate city, it was annexed to Seattle in 1891. It is named after Fremont, Nebraska, the hometown of two of its founders: Luther H. Griffith and Edward Blewett.

It is situated along the Fremont Cut of the Lake Washington Ship Canal to the north of Queen Anne, the east of Ballard, the south of Phinney Ridge, and the southwest of Wallingford. Its boundaries are not formally fixed, but they can be thought of as consisting of the Ship Canal to the south, Stone Way N. to the east, N. 50th Street to the north, and 8th Avenue N.W. to the west.

The neighborhood's main thoroughfares are Fremont and Aurora Avenues N. (north- and southbound) and N. 46th, 45th, 36th, and 34th Streets (east- and westbound). The Aurora Bridge (George Washington Memorial Bridge) carries Aurora Avenue (State Route 99) over the Ship Canal to the top of Queen Anne Hill, and the Fremont Bridge carries Fremont Avenue over the canal to the hill's base. A major shopping district is centered on Fremont Avenue N. just north of the bridge. 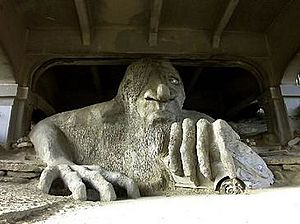 Sometimes referred to as "The People's Republic of Fremont" or "The Artists' Republic of Fremont," and at one time a center of the counterculture, Fremont has become somewhat gentrified in recent years. The neighborhood remains home to a controversial statue of Vladimir Lenin salvaged from Slovakia by a local art lover who was teaching in the area at the time. After the 1989 fall of the Communist government, he brought the statue to Fremont with money raised through a mortgage on his house. In addition to Lenin is the Fremont Troll, an 18-foot-tall (5 m) concrete sculpture of a troll crushing a Volkswagen Beetle in its left hand, created in 1990 and situated under the north end of the Aurora Bridge. The street running under the bridge and ending at the Troll was renamed Troll Avenue N. in 2005.

Since the early 1970s some Fremont residents have been referring to their neighborhood as "The Center of the Universe" (which also appears on a large "Welcome" sign ). An unofficial motto "De Libertas Quirkas" ("Freedom to be Peculiar") appears in brochures and websites about the area.

The Fremont Arts Council sponsors several highly attended annual events in Fremont. One of those events is the Summer Solstice Parade & Pageant. Another event is the Troll-a-ween.

Also important to Fremont is the large block on Linden Avenue N. that contains the B.F. Day Elementary School and B.F. Day Playground, two separate entities. B.F. Day is the longest continually operating school in the Seattle school district, having been founded in 1892.

Another longstanding institution is the Fremont branch of the Seattle Public Library. An informal library predated the 1891 annexation of Fremont to Seattle, and annexation made it the city's first branch library. The present structure dates from 1921.

Besides the B.F. Day playfield, Fremont has three small public parks, Fremont Peak Park just south of N. 45th Street, Ross Park and Playground at 3rd Avenue NW and NW 43rd Street, and A.B. Ernst Park next to the library. Ernst Park was named for Ambrose Ernst, a Fremont resident. He was known as the "Father of City Playfields". He served on the Board of Park Commissioners from 1906 to 1913 and helped implement Seattle's Olmsted parks plan. The Burke-Gilman Trail passes through Fremont just north of the Lake Washington Ship Canal. The large Gas Works Park is just east of Fremont on the north shore of Lake Union.

A growing number of technology companies have offices in Fremont, including Adobe Systems, the Allen Institute for Brain Science, Google, SDL PLC, Groundspeak, Impinj, Sporcle, and Tableau Software. Most of these offices are along the Lake Washington Ship Canal.

The neighborhood is home to a number of nonprofit organizations, including Literacy Source and Provail, a provider of social services to people with disabilities and an affiliate of the United Cerebral Palsy network.

A wedge-shaped building on the diagonal street Leary Way that cuts across Fremont from the adjacent Ballard neighborhood was once home to legendary Seattle producer Jack Endino's Reciprocal Recording studio, where he recorded (among many other records) Nirvana's first demos and the band's debut on Sub Pop records, Bleach.

All content from Kiddle encyclopedia articles (including the article images and facts) can be freely used under Attribution-ShareAlike license, unless stated otherwise. Cite this article:
Fremont, Seattle Facts for Kids. Kiddle Encyclopedia.