The Aurora Bridge (officially called the George Washington Memorial Bridge) is a cantilever and truss bridge in Seattle, Washington, United States. It carries State Route 99 (Aurora Avenue North) over the west end of Seattle's Lake Union and connects Queen Anne and Fremont. The bridge is located just east of the Fremont Cut, which itself is spanned by the Fremont Bridge.

The Aurora Bridge is owned and operated by the Washington State Department of Transportation. It is 2,945 ft (898 m) long, 70 ft (21 m) wide, and 167 ft (51 m) above the water. The bridge was opened to traffic on February 22, 1932, the 200th anniversary of the birth of namesake George Washington. It was listed on the National Register of Historic Places in 1982. 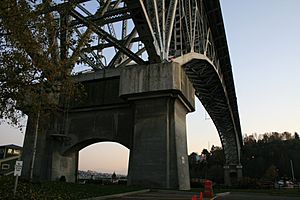 The northern anchor of the bridge 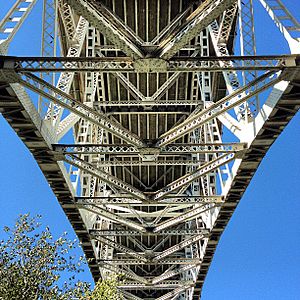 View from beneath the bridge

The bridge is 2,945 ft (898 m) long, 70 ft (21 m) wide, 167 ft (51 m) above the water and is owned and operated by the Washington State Department of Transportation (WSDOT). There are two V-shaped cantilever sections supporting the bridge deck, each 325 ft (99 m) long and balanced on large concrete pilings at opposite sides of the ship canal which serve as the two main supporting anchors. Some 828 timber piles were driven for the foundation of the south anchor and 684 piles for the north. They range in size from 110 to 120 feet (34 to 37 m) and rest 50 to 55 feet (15 to 17 m) below the surface of the water. Together, the anchors support a load of 8,000 tons. Their construction required a pile driver that was specially designed to work underwater.

A 150 ft (46 m) long Warren truss suspended span connects the two cantilevers in the middle. The bridge's main span is 475 ft (145 m) long. At either end of the bridge there are additional Warren truss spans which connect the cantilevered spans to the highway.

Construction on the bridge piers began in 1929, with construction of the bridge following shortly afterwards in 1931. The bridge's dedication was held on February 22, 1932, George Washington's 200th birthday; it opened to traffic the same day. A time capsule was installed on the bridge by the widow of Judge Thomas Burke and is planned to be opened in 2032.

The bridge was the final link in what was then called the Pacific Highway (later known as U.S. Route 99), which ran from Canada to Mexico. The bridge crosses the Lake Union section of the Lake Washington Ship Canal and, unlike earlier bridges across the canal, the height of the Aurora Bridge eliminated the need for a drawbridge. In 1930 Seattle City Council voted to build connecting portions of the highway through the Woodland Park Zoo, a decision which generated considerable controversy at the time.

The bridge was designed by the Seattle architectural firm Jacobs & Ober, with Ralph Ober as the lead engineer on the project. Ober died in August 1931, of a brain hemorrhage while it was still under construction. Federal funding programs were not available at the time, so the bridge was funded by Seattle, King County, and the state of Washington.

The bridge was nominated for the National Register of Historic Places on January 2, 1980, on account of its "functional and aesthetic" design qualities and its historical status as the first bridge constructed in the region without streetcar tracks. It was accepted to the National Register on July 16, 1982. The bridge formerly had a set of pedestrian refuge islands in the highway's median that were removed in 1944.

In 1990 the Fremont Troll—a large cement sculpture of a troll clutching a real-life Volkswagen Beetle—was installed under the bridge's north end. Up to half of the $40,000 cost for the artwork was donated from Seattle's Neighborhood Matching Fund, a local program to raise money for community projects. The Troll was heavily vandalized in the year following its construction, and large floodlights were installed on the bridge to discourage further damage.

Following the collapse of the Minneapolis I-35W arch-truss bridge on August 1, 2007, WSDOT was directed to perform inspections of all steel cantilever bridges in the state that used gusset plates in their design, including the George Washington Memorial Bridge. The bridge had earlier been certified as structurally sound with no serious deficiencies detected. That year, the Federal Highway Administration National Bridge Inventory found the bridge to be "functionally obsolete". The bridge was given a sufficiency rating of 55.2% and evaluated to be "better than minimum adequacy to tolerate being left in place as is". Its foundations and railings met the acceptable standards and no immediate corrective action was needed to improve it.

The George Washington Memorial Bridge underwent extensive seismic retrofitting in 2011 and 2012 at a cost of $5.7 million. During a regular inspection in October 2019, WSDOT structural engineers determined that an outside stringer beam on the southbound side of the bridge had corroded to the point of creating a visible sag in the roadway. Southbound traffic was reduced to two lanes for an emergency repair that cost $500,000 and took seven days (out of a scheduled ten days).

All content from Kiddle encyclopedia articles (including the article images and facts) can be freely used under Attribution-ShareAlike license, unless stated otherwise. Cite this article:
Aurora Bridge Facts for Kids. Kiddle Encyclopedia.