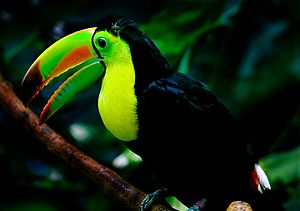 Woodland Park Zoo is a wildlife conservation organization and zoological garden located in the Phinney Ridge neighborhood of Seattle, Washington, United States. It is the recipient of over 65 awards across multiple categories, and has served approximately 1.4 million domestic & international visitors in 2019.

Occupying the western half of Woodland Park, the zoo began as a small menagerie on the estate of Guy C. Phinney, a Canadian-born lumber mill owner and real estate developer. Six years after Phinney's death, on December 28, 1899, Phinney's wife sold the 188-acre (76 ha) Woodland Park to the city for $5,000 in cash and the assumption of a $95,000 mortgage. The sum was so large that then-mayor W. D. Wood vetoed the acquisition, only to be later overruled by the city council. In 1902, the Olmsted Brothers firm of Boston was hired to design the city's parks, including Woodland Park, and the next year the collection of the private Leschi Park menagerie was moved to Phinney Ridge.

In 1975, David Hancocks, the then-director of the Woodland Park zoo, redesigned the zoo's gorilla exhibit to form what became referred to as landscape immersion exhibits, in which animals would become immersed in landscapes that represented their natural habitats as closely as possible, while visitors would also be immersed in the same replicated habitat. The habitat was designed with natural plants and rockwork, with special consideration being put towards the acoustic treatment of the exhibit to make the environment soft and quiet. Initially the idea was heavily criticized, with many experts being concerned about the maintenance of vegetation and lack of visibility, as well as the temperate environment of Washington negatively affecting the soil. The idea eventually became the standard for naturalistic exhibits, inspiring many imitators and replicas worldwide.

As of the summer of 2010[update], the zoo features 92 acres (37 ha) of exhibits and public spaces. Open to the public daily, it received 1.05 million visitors in 2006. Its collection includes:

Woodland Park Zoo is a recipient of several Best National Exhibit awards from the Association of Zoos and Aquariums, and ranks second after the Bronx Zoo in New York City for the number received. Woodland Park Zoo created what is generally considered the world's first immersion exhibit, a gorilla habitat, which opened in the late 1970s under the direction of zoo architect David Hancocks. Other exhibits include: 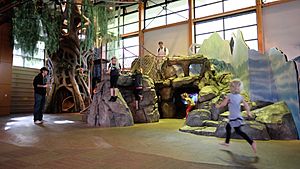 The Zoomazium play area for kids 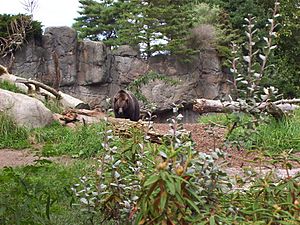 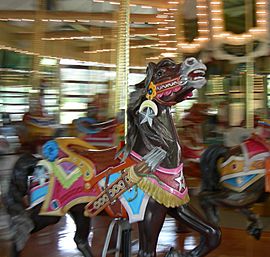 Woodland Park Zoo has been an active member of environmental and ecological conservation efforts across the U.S. Besides operating its own educational programs for school children, the park also cooperates with many of the higher education institutions in state, such as the University of Washington. On January 5, 2010, the zoo announced that due to the "difficult economy," it would be closing its Night Exhibit. 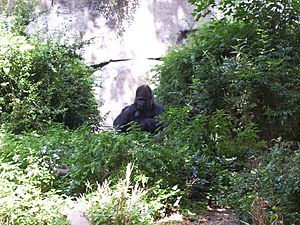 Bobo's successors live in a modern landscaped enclosure with glass panels that allow visitors to get up close without disturbing the gorillas.

From 1953 to 1968, Woodland Park Zoo was home to Bobo, a western lowland gorilla (Gorilla gorilla gorilla, the same species as the gorillas currently living at the zoo). Bobo was acquired from the Lowman family of Anacortes, Washington, who had purchased the gorilla as an infant from a hunter in Columbus, Ohio in 1951 and had raised him in their family home in Anacortes. Bobo drew many visitors to the zoo and was one of Seattle's main attractions in the years preceding the construction of Seattle Center and the expansion of major-league professional sports into the city. His popularity is credited with helping the zoo obtain funding to build a new primate house.

Anthropologist Dawn Prince-Hughes spent many years working at Woodland Park Zoo and observing the western lowland gorillas there, which she wrote about in her book Songs of the Gorilla Nation: My Journey Through Autism.

Two lionesses named Busela (Seyla) and Nobuhle (Nabu) were transferred from the zoo to Hogle Zoo in Salt Lake City, Utah to breed with the Montgomery Zoo's two male lions, Baron and Vulcan. On February 24, 2016, Nabu gave birth to two males, Brutus and Titus, and a female, Calliope. Baron fathered the three cubs.

In December 2015 a baby gorilla, Yola, was born at the zoo. She is the first child of Nadiri who was also born there.

On June 20, 2017, the baby giraffe Lulu was born, weighing 5'7" and 149 lbs. The daughter of Tufani and Dave, she is a mixture of the reticulated and South African giraffe subspecies. Her naming rights were auctioned off at the zoo's Jungle Safari Party fundraiser. A male snow leopard cub was also born at the zoo that summer; he was given the name of Aibeck, meaning "long life" in Kyrgyz.

All content from Kiddle encyclopedia articles (including the article images and facts) can be freely used under Attribution-ShareAlike license, unless stated otherwise. Cite this article:
Woodland Park Zoo Facts for Kids. Kiddle Encyclopedia.