The Fremont Troll (also known as The Troll, or the Troll Under the Bridge) is a public sculpture in the Fremont neighborhood of Seattle, Washington in the United States. 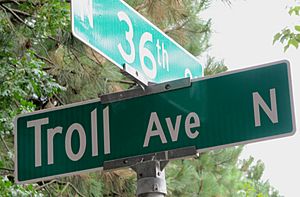 The Troll is a mixed media colossal statue, located on N. 36th Street at Troll Avenue N., under the north end of the George Washington Memorial Bridge (also known as the Aurora Bridge). It is clutching an actual Volkswagen Beetle, as if it had just swiped it from the roadway above. The vehicle has a California license plate. Originally, the car held a time capsule, including a plaster bust of Elvis Presley, which was stolen when the sculpture was vandalized.

The Troll was sculpted by four local artists: Steve Badanes, Will Martin, Donna Walter, and Ross Whitehead. The idea of a troll living under a bridge is derived from the Scandinavian (Norwegian) folklore.

The artists have copyright to the Troll images. They have sued businesses that use its image commercially without written permission. Postcards, beer, and other products approved by the artists are commercially available, and use is free to non-profit organizations. 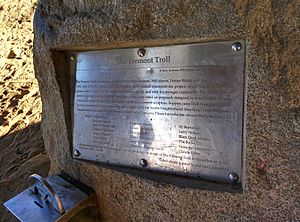 Plaque for the sculpture

In 1990, the Fremont Arts Council launched an art competition whose partial goal was to rehabilitate the area under the bridge.

In 2005, the segment of Aurora Avenue North under the bridge, running downhill from the Troll to North 34th Street was renamed "Troll Avenue" in honor of the sculpture. In 2011 the Fremont Arts Council licensed a Chia Pet based on the Fremont Troll that was sold at a local drug store chain. In 2016, the Chicago rock band Majungas released "The Fremont Troll" off their Seattle Rock album. Starting in 2017, the seventh season of Once Upon a Time heavily featured a replica of the troll, providing it a backstory that includes references to the book "The BFG".

All content from Kiddle encyclopedia articles (including the article images and facts) can be freely used under Attribution-ShareAlike license, unless stated otherwise. Cite this article:
Fremont Troll Facts for Kids. Kiddle Encyclopedia.