The town's most known feature is Jacob's Ladder. It is a walkway up the mountains with 699 steps. The ladder was built in 1829 to connect Jamestown to the military base on Ladder Hill. The ladder is very popular with tourists. It is beautifully lit at night. Each year, people come from all over the world to take part in a timed run up the ladder. 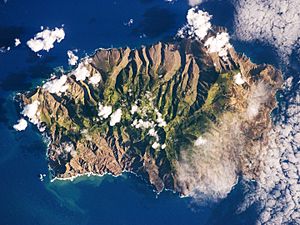 The town has some very fine examples of British Georgian era Colonial Architecture and is proposed as a UNESCO World Heritage Site. Many buildings are also built out of volcanic rock from the local area. The town is complete with a church, and port facilities for unloading goods delivered to the island. Jamestown is the main centre of the island's road network and communications.

It is a small town situated between large steep cliffs, which are not suitable for building. Therefore Jamestown is quite densely populated, and is rather long and thin, it also has a large number of tight, long and winding streets. The settlement is built on a large amount of volcanic rock. The temperature in this area is some 5 degrees warmer than the rest of the island, because of the difference in altitude between Jamestown and the rest of the island. The area is rough and steep. The surrounding waters can be quite rough at times, and there is a sea wall to protect the settlement.

All content from Kiddle encyclopedia articles (including the article images and facts) can be freely used under Attribution-ShareAlike license, unless stated otherwise. Cite this article:
Jamestown, Saint Helena Facts for Kids. Kiddle Encyclopedia.