Barter Island is an island located on the Arctic coast of the U.S. state of Alaska, east of Arey Island in the Beaufort Sea. It is about four miles (6 km) long and about two miles (3 km) wide at its widest point. 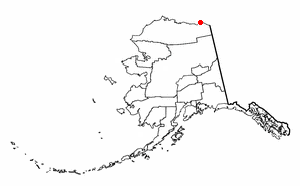 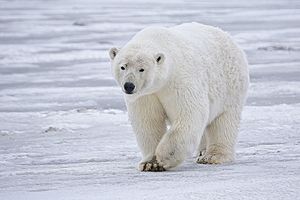 A polar bear near Kaktovik

Until the late 19th century, Barter Island was a major trade center for the Inupiat people and was especially important as a bartering place for Inupiat from Alaska and Inuit from Canada, hence its name.

At one time before about 1900, there had been a large whaling village on Barter Island. Tradition has it that the Alaska Inupiat drove the villagers, Canadian Inupiat, from the island in about 1900.

In about 1919, trader Tom Gordon and his wife, Mary Agiaq Gordon, moved from Barrow to Barter Island with their family, some relatives, friends, and their families. Mary's younger brother, Andrew Akootchook, helped to choose the location for the trading post, because of its good harbor and convenient and accessible location for hunting on land and sea. Tom Gordon and the settlers built a trading post at the site and a few families settled near Gordon's trading post.

All content from Kiddle encyclopedia articles (including the article images and facts) can be freely used under Attribution-ShareAlike license, unless stated otherwise. Cite this article:
Barter Island Facts for Kids. Kiddle Encyclopedia.