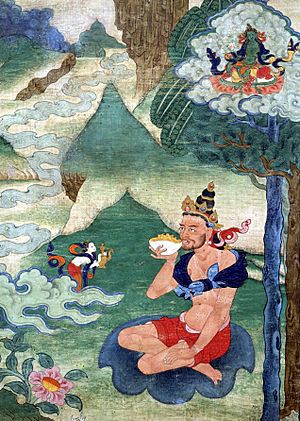 Nāropā (956–1041) was an Indian Buddhist teacher. He was the disciple of Tilopa and also brother and pupil of Niguma. Naropa was the main teacher of Marpa, the founder of the Kagyu school of Tibetan Buddhism.

Naropa was born a high status Brahmin and from an early age showed strong, highly intelligent mind. At the age of 28 Naropa entered the famous Buddhist University at Nalanda where he studied both Sutra and Tantra. He had the reputation of a great scholar and debater. Later Naropa became studend of Tilopa and spent twelve years with him. While studying and meditating with his teacher Naropa met and overcame twelve minor and twelve major hardships. Eventually he reached full realization and become teacher of Marpa.

All content from Kiddle encyclopedia articles (including the article images and facts) can be freely used under Attribution-ShareAlike license, unless stated otherwise. Cite this article:
Naropa Facts for Kids. Kiddle Encyclopedia.