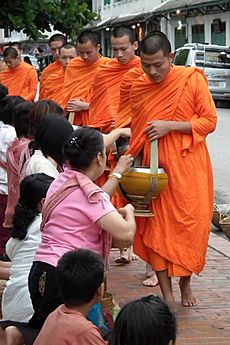 In Buddhism, the word sangha means "assembly" or "community." For Buddhists, there are two sanghas that are very important:

In Buddhism, there are three things that a Buddhist shows the greatest respect: the Buddha, the Dharma (the Buddha's teaching), and the Sangha (the Buddha's community). So, for instance, when the sangha is talked about in very old Buddhist books, the following words are often used:

All content from Kiddle encyclopedia articles (including the article images and facts) can be freely used under Attribution-ShareAlike license, unless stated otherwise. Cite this article:
Sangha Facts for Kids. Kiddle Encyclopedia.