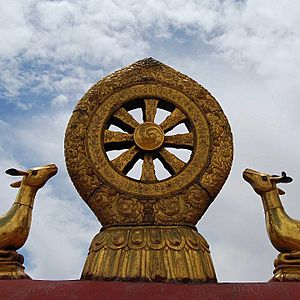 In Buddhism, the Noble Eightfold Path (Pali: ariya atthangika magga) is the path to the end of suffering. It is the fourth part of the Four Noble Truths. It can be summed up in three categories: wisdom (pañña), virtue (sila), and concentration (samadhi). It asks for the Right view and the right intention, as well as other things. It also asks for the right speech.

Here is a description of the path:

All content from Kiddle encyclopedia articles (including the article images and facts) can be freely used under Attribution-ShareAlike license, unless stated otherwise. Cite this article:
Noble Eightfold Path Facts for Kids. Kiddle Encyclopedia.