The flag of Ulaanbaatar

The coat of arms of Ulaanbaatar

Ulaanbaatar, or Ulan Bator, is the capital and largest city of Mongolia. The city is an independent municipality not part of any provinces, and its population as of 2008 is just over 1 million. Located in the north central part of the country, the city is at an elevation of about 1310 m in a valley on the Tuul River. The city is the country's center for culture, industry and finance, and since it is more than 13 times bigger than the second largest city in Mongolia, Erdenet, it is the country's primate city. Ulaanbaatar is connected by highway to all the major towns in Mongolia and by rail to the Trans-Siberian Railway and Chinese railroad network. The city was founded in 1639 as a Buddhist monastery center and, in the 20th century, grew into a major manufacturing center.

Ulaanbaatar has had many names in its history. From 1639–1706, it was known as Örgöö (Mongolian: Өргөө, residence), and from 1706–1911 as Ikh Khüree (Mongolian: Их = "great", Хүрээ = "camp"), Da Khüree or simply Khüree. Upon independence in 1911,the city's name changed to Niislel Khüree (Mongolian: Нийслэл = "capital", Хүрээ = "camp"). When the city became the capital of the new Mongolian People's Republic in 1924, its name was changed to Ulaanbaatar, literally "red hero", in honour of Mongolia's national hero Damdin Sükhbaatar, that liberated Mongolia from Ungern von Sternberg's troops and Chinese occupation with the Soviet Red Army. In Europe and North America, Ulaanbaatar was generally known as Urga (from Örgöö) or sometimes Kuren (from Khüree) or Kulun (from 庫倫, the Chinese transcription of Khüree) before 1924.

Ulaanbaatar is at about 1350 meters (4430 ft) above sea level. For this high elevation, and for the high latitude, and location hundreds of kilometres from any coast, Ulaanbaatar is the coldest national capital in the world, with a subarctic climate.

- 1778: the city settled for good at its current location, near the confluence of the Selbe and Tuul rivers and beneath Bogd Khan Uul, back then also on the caravan route from Beijing to Kyakhta.

- 1911: Mongolian leaders in Ikh Khüree for Naadam met in secret and resolved upon independence from China for their country. On December 29, 1911, the Bogd Khan was declared ruler of an independent Mongolia.

- 1919: the city was occupied by Chinese troops

- 1921: the city has been controlled first by Baron Ungern's Whites Soldateska, and in July to the Soviet-supported Mongolian troops controlled by Sükhbaatar.

- 1956: The Transmongolian Railway, connecting Ulaanbaatar with Moscow and Beijing, was completed.

- Many of the temples and monasteries of pre-socialist were destroyed following the anti-religious purges of the late 1930s.

- After the growth of 1990 many buildings as, cinemas, shops were built. Now the biggest cinema is Urguu and Tengis cinema. Main shopping district is 3rd and 4th distirict.

- 2008, Ulaanbaatar was the scene of riots after the opposition Mongolian Democratic Party protested its defeat by the MPRP in parliamentary elections.

Ulaanbaatar is divided into nine districts (Düüregs): Baganuur, Bagakhangai, Bayangol, Bayanzürkh, Chingeltei, Khan Uul, Nalaikh, Songino Khairkhan, and Sükhbaatar. Each district is subdivided into Khoroos. The capital is governed by a city council (the Citizen's Representatives Hural) with forty members, elected every four years. The city council appoints the mayor. Ulaanbaatar is governed as an independent first-level subdivision of Mongolia, separate from Töv Aimag, the province that surrounds Ulaanbaatar.

And a big library, The National Library of Mongolia. 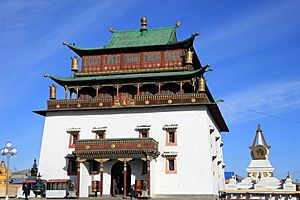 Most important places in Ulaanbaatar:

Choijin Lama Monastery and Gandantegchinlen Khiid Monastery are two of the very few in Mongolia to escape the destruction of Mongolian monasteries under Khorloogiin Choibalsan.

Ulaanbaatar has several museums dedicated to Mongolian history and culture. 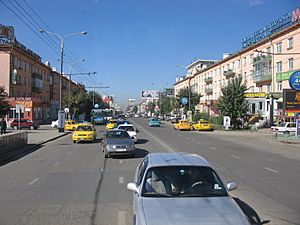 The official symbol of Ulaanbaatar is the garuḍa, a mythical bird in both Buddhist and Hindu mythology called Khan Garuda or Khangar'd by Mongols.

The city’s flag is sky blue with the garuḍa arms in the center.

All content from Kiddle encyclopedia articles (including the article images and facts) can be freely used under Attribution-ShareAlike license, unless stated otherwise. Cite this article:
Ulan Bator Facts for Kids. Kiddle Encyclopedia.