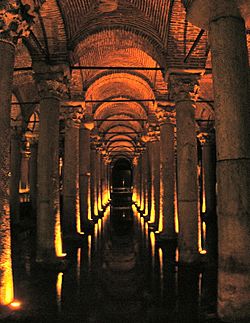 View of the Basilica Cistern

The Basilica Cistern is the largest of several hundred ancient cisterns under the city of Istanbul (formerly Constantinople), Turkey. The cistern, is close to the Hagia Sophia.

Emperor Justinian I commissioned his city prefect Longinus to build it. It was completed in 532, after the Nika riots. As many as 7,000 slaves worked to build the cistern.

The large cistern provided a water source for the emperor's palace. Sometime before the Ottoman conquest of Constantinople in 1453 the cistern was closed. It was discovered in 1545 by Petrus Gyllius. After that Ottoman city officials used it for dumping waste including corpses. It has been restored at least three times. In 1985 it was closed for cleaning again. In 1987 it was opened to the public as a tourist attraction. 2 million tourist visited the Cistern in 2013.

The cistern was used for a James Bond movie From Russia with Love. Also the 2009 movie The International was shot here. The 2011 video game, Assassin's Creed: Revelations includes scenes from the Basilica Cistern.

All content from Kiddle encyclopedia articles (including the article images and facts) can be freely used under Attribution-ShareAlike license, unless stated otherwise. Cite this article:
Basilica Cistern Facts for Kids. Kiddle Encyclopedia.