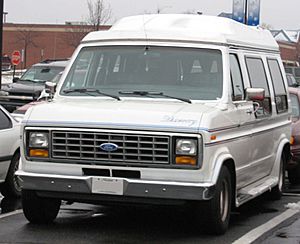 Campervans are self-propelled vehicles that can provide transport and sleeping accommodation. The term campervan mainly represents vans which are fitted out, with a coachbuilt body for use as accommodation. In the United States, the vans are also known as recreational vehicles, and are larger than in Europe. Such vehicles sometimes have a refrigerator, microwave oven, showers and televisions.

Campervans may be equipped either with a "pop-up" roof which is raised during camping or a fixed roof, either shared with the commercial van that forms the basis of the vehicle (commonly a "high-top" model), or as part of a custom coach-built body.

Campervans usually have a small kitchen with a refrigerator (which is often powerable by a choice of gas, battery, or mains electricity) and a two-burner gas hob and grill. They generally have dual-voltage lighting which can work from either a dedicated battery (other than the van battery) known as a deep-cycle or leisure battery, or from AC power, supplied at a campsite via a hook-up cable. Larger models may include a water heater, space heating and air conditioning, a portable toilet and even an internal shower. Smaller models often carry a "porta-potty" portable toilet, and sometimes an external shower which operates within the privacy of an awning.

All content from Kiddle encyclopedia articles (including the article images and facts) can be freely used under Attribution-ShareAlike license, unless stated otherwise. Cite this article:
Campervan Facts for Kids. Kiddle Encyclopedia.