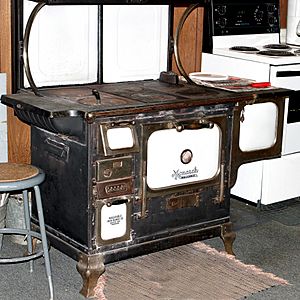 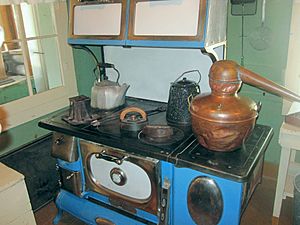 A stove at Holzwarth Ranch National Historic Site in Colorado

A kitchen stove, often called simply a stove or a cooker, is a kitchen appliance designed for the purpose of cooking food. Kitchen stoves rely on the application of direct heat for the cooking process and may also contain an oven, used for baking.

"Cookstoves" (also called "cooking stoves" or "wood stoves") are heated by burning wood or charcoal; "gas stoves" are heated by gas; and "electric stoves" by electricity. A stove with a built-in cooktop is also called a range.

In the industrialized world, as stoves replaced open fires and braziers as a source of more efficient and reliable heating, models were developed that could also be used for cooking, and these came to be known as kitchen stoves. When homes began to be heated with central heating systems, there was less need for an appliance that served as both heat source and cooker and stand-alone cookers replaced them. Cooker and stove are often used interchangeably.

The fuel-burning stove is the most basic design of kitchen stove. Nearly half of the people in the world, mainly in the developing world), burn biomass (wood, charcoal, crop residues, and dung) and coal in basic cook-stoves or open fires to cook their food. More fuel efficient and environmentally sound biomass cook stoves are being developed for use in these places.

Natural gas and electric stoves are the most common today in western countries. Both are equally effective and safe, and the choice between the two is largely a matter of personal preference and pre-existing utility outlets: if a house has no gas supply, adding one just to be able to run a gas stove can be expensive.

Modern kitchen stoves often have a "stove-top" or "cooktop" as well as an oven. A "drop-in range" is a combination stove-top and oven unit that installs in a kitchen's lower cabinets flush with the counter-top. Most modern stoves come in a unit with built-in extractor hoods.

Professional chefs often prefer gas stovetops, for they allow them to control the heat more finely and more quickly. Today's major brands offer both gas and electric stoves, and many also offer dual-fuel ranges combining a gas stove-top and an electric oven. 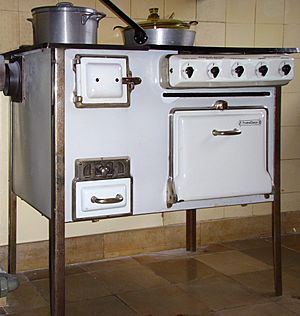 The modern kitchen range was invented by Sir Benjamin Thompson, Count Rumford in the 1790s. As an active scientist and prolific inventor, he put the study of heat onto a scientific basis and developed improvements for chimneys, fireplaces and industrial furnaces, which led to his invention of the kitchen range.

A gas stove was shown at The Great Exhibition in London in 1851, but it was only in the 1880s that the technology became a commercial success in England. By that stage a large and reliable network for gas pipeline transport had spread over much of the country, making gas relatively cheap and efficient for domestic use. Gas stoves only became widespread on the European Continent and in the United States in the early 20th century.

Once electric power was widely and economically available, electric stoves became a popular alternative to fuel-burning appliances. One of the earliest such devices was patented by Canadian inventor Thomas Ahearn in 1892. Ahearn was part owner of Ottawa's Chaudiere Electric Light and Power Company. The electric stove was showcased at the Chicago World's Fair in 1893, where an electrified model kitchen was shown. 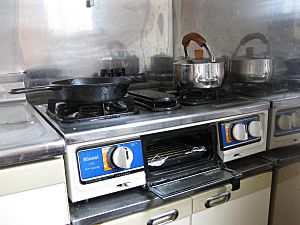 Unlike the gas stove, the electrical stove was slow to catch on, partly due to the unfamiliar technology, and the need for cities and towns to be electrified. Early electric stoves were unsatisfactory due to the cost of electricity (compared with wood, coal, or city gas), limited power available from the electrical supply company, poor temperature regulation, and short life of heating elements. The invention of nichrome alloy for resistance wires improved the cost and durability of heating elements.

The first practical design was patented by the Australian David Curle Smith in 1905. His device is what later became the configuration for most electric stoves: an oven surmounted by a hotplate with a grill tray between them.

Microwave ovens were developed in the 1940s, and use microwave radiation to directly heat the water held inside food.

All content from Kiddle encyclopedia articles (including the article images and facts) can be freely used under Attribution-ShareAlike license, unless stated otherwise. Cite this article:
Kitchen stove Facts for Kids. Kiddle Encyclopedia.