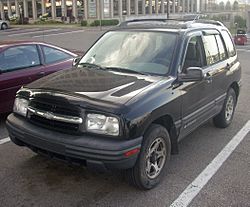 The Chevrolet Tracker was a subcompact SUV made in Canada. It is sold by General Motors. It was introduced in 1989 as a Geo model. It derives from Suzuki's Escudo model. The Tracker was built at CAMI Automotive which was jointly owned by GM and Suzuki til 2010. In Canada it was sold under various names such as GMC Tracker and Asüna/Pontiac Sunrunner. The Sunrunner was replaced in 2001 by the minivan based Aztek CUV. In 1998 the Tracker became an official Chevrolet brand due to GM consolidating the Geo brand. The United States/Canadian version of the Tracker continued until 2004 where it was discontinued and replaced by the Chevrolet Equinox. The Tracker was still made in Mexico and Brazil until the late 2000s where it was replaced by the Chevrolet Captiva and the Chevrolet Captiva Sport. In 2015 Chevrolet introduced Trax model to the U.S. and it serves as a secondary replacement for the Tracker.

All content from Kiddle encyclopedia articles (including the article images and facts) can be freely used under Attribution-ShareAlike license, unless stated otherwise. Cite this article:
Chevrolet Tracker Facts for Kids. Kiddle Encyclopedia.