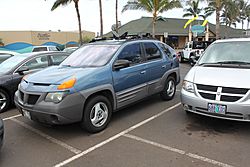 The Pontiac Aztek is a mid-size crossover sold by the Pontiac division of General Motors from 2001-2005. The vehicle was GM's first venture into the crossover market. It also had a twin the Buick Rendezvous. Both were built on the GM's minivan platform. The Aztek was a cross between a minivan and an SUV.

With a front engine and four-wheel drive (available after January 2001), the Aztek featured a four-speed automatic transmission and a V-6 engine. Pontiac marketed it as a "sport recreational vehicle." It featuring 94 cubic feet of cargo room capable of carrying a 4' x 8' sheet of plywood with its rear seats removed. Other features included a rear center console that doubled as a removable cooler. It had rear stereo controls in the cargo area. The Aztek featured an available camping package with an attachable tent and inflatable mattress. The latter could be inflated by a built-in air compressor.

The Aztek was a commercial failure. It was also called one of the worst vehicles ever made. Criticized for its awkward styling it was called downright ugly. The Aztek was phased out and replaced by the Pontiac Torrent. The Rendezvous continued to be sold until 2008 when it was replaced by the Enclave.

All content from Kiddle encyclopedia articles (including the article images and facts) can be freely used under Attribution-ShareAlike license, unless stated otherwise. Cite this article:
Pontiac Aztek Facts for Kids. Kiddle Encyclopedia.