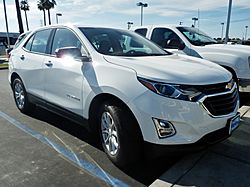 Chevrolet Equinox is a mid-sized crossover CUV sold by Chevrolet. It was introduced for the 2005 model year. It is General Motors' third unibody crossover SUV. The first two were the Pontiac Aztek and Buick Rendezvous. The Equinox is built on an extended version of GM's Theta platform, it is the second vehicle to use this platform the Vue was the first. The Equinox replaces the S10 Blazer and Tracker. From 2005-2009 a rebadged model was sold under Pontiac as the Pontiac Torrent. The Torrent replaced the Aztek. The Equinox was redesigned in 2010 giving it a more contemporary look. Chevrolet announced that in 2016 the Equinox would be redesigned as a compact crossover, this will allow the automaker to introduce a new midsize crossover with third row seating. This decision was made because of competition from other automakers who offer midsize CUVs with a third row.

All content from Kiddle encyclopedia articles (including the article images and facts) can be freely used under Attribution-ShareAlike license, unless stated otherwise. Cite this article:
Chevrolet Equinox Facts for Kids. Kiddle Encyclopedia.