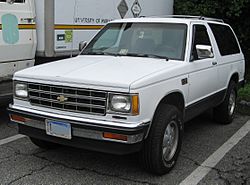 The Chevrolet S-10 Blazer and the similar GMC S-15 Jimmy were mid-size SUVs from General Motors. Production began in 1983. The S-10 was produced through 2005. In the United States retail sales after 2004 were limited to two-door Blazer models. All other models were sold to fleets until April 20, 2005. In the Canadian market, four-door models of the Blazer and Jimmy were sold until the 2004 model year. They were sold until the 2005 model year for the two-door models of both.

The S-series SUVs were based on the Chevrolet S-10 and GMC S-15 pickup trucks. In 1995 a second-generation model was produced. It had improvements in performance and interior room. It also had updated styling but did not carry the S-10 name.

They were produced in Pontiac, Michigan; Linden, New Jersey; Moraine, Ohio; Shreveport, Louisiana; and São Paulo, Brazil. Even though production ceased in the U.S., new Blazers are locally produced in Brazil with their own sheet metal stampings). In North America, the Moraine plant produced only 4-door vehicles. Both 2- and 4-door models were produced at Linden, which was the main assembly plant after the switch from Pontiac, Michigan about 1995.

All content from Kiddle encyclopedia articles (including the article images and facts) can be freely used under Attribution-ShareAlike license, unless stated otherwise. Cite this article:
Chevrolet S-10 Blazer Facts for Kids. Kiddle Encyclopedia.