The Montréal International Auto Show (MIAS) is produced by the Montréal Automobile Dealers Corporation. When it was first launched in 1969, the show's aim was to beef up car sales during a time of the year when business was known to be relatively slow for car dealerships. This event is, after all these years, a much-anticipated annual rite among Montréalers and it is one of the most important events of its type in Canada with an average of more than 200,000 visitors. The auto show features over 650 vehicles on 375,000 square feet (34,800 m2). [1]. 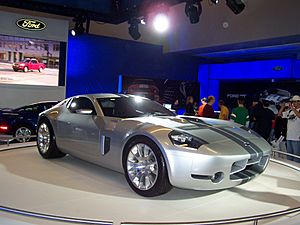 The 2014 edition of the MIAS was held at Palais de Congrés from January 17 to January 26 inclusively.

United States (Including its Canadian-owned subsidiaries)

All content from Kiddle encyclopedia articles (including the article images and facts) can be freely used under Attribution-ShareAlike license, unless stated otherwise. Cite this article:
Montreal International Auto Show Facts for Kids. Kiddle Encyclopedia.